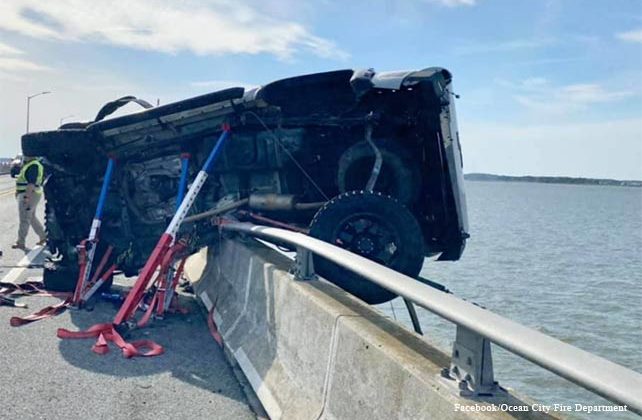 A Good Samaritan is being hailed as a hero for unconsciously diving off an Ocean City, Maryland highway bridge this past Sunday to save a 2-year-old girl who was ejected from her vehicle after it was involved in a five car crash.

The rescuer, who was a few vehicles behind the accident and wishes to remain anonymous, dove approximately 25 feet into the water to rescue the infant who’s car was teetering over the guardrail. Firefighters immediately secured the vehicle as they arrived at the scene.

A family who was boating nearby saw what had transpired and quickly assisted the man and infant into their boat and took them to a nearby boat ramp where paramedics were waiting.

Joe Oertel, the man who owns the boat, said “Seconds counted in this rescue! Unbelievable that the Hero who jumped probably didn’t know that the bay is only 4’-5’ deep in that area.”

The infant was transported by helicopter to John Hopkins Children’s Hospital and is in stable condition. According to reports seven others involved in the accident were transported to by ground to various hospitals.

The infant was transported by helicopter to John Hopkins Children’s Hospital and is in stable condition. According to reports seven others involved in the accident were transported to by ground to various hospitals.

Comments on the Ocean City Fire Departments Facebook page has been flooded with people saying they are “praying” and praising the hero’s bravery. Here are a few of those comments:

“My prayers to everyone involved in this horrible accident and that everyone is going to be ok and to the good samaritan who risked there own life god bless you and to all the first responders thank you for your service stay safe.”

“I don’t know who the Good Samaritan is but wonderful job. You deserve a presidential medal of freedom. I hope law enforcement and medical personnel get recognized too. Good job to everyone. And prayers too all involved.”

“Let’s get this hero’s face all over social media and the news. They deserve to be recognized for their amazing actions. Absolutely amazing!!! I’m praying for everyone involved!!!”

“Praying for the best possible outcome for all involved. Wondering about the bay conditions. Water temp and current. Very dangerous situation. God bless this good Samaritan!! A truly selfless act!”