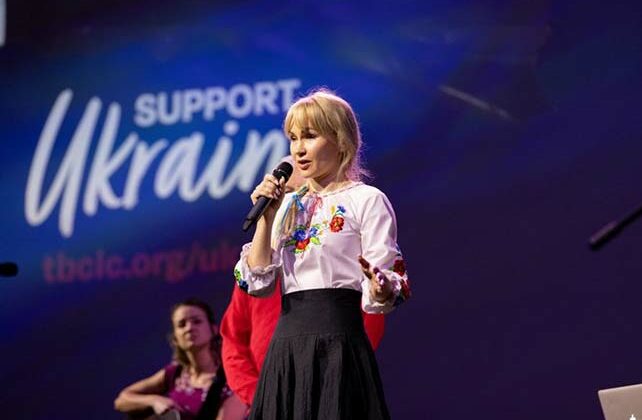 LAKE CHARLES, La. (BP) – With many of her family members experiencing the devastating effects of the crisis in Ukraine, Irina Moss is partnering with her Trinity Baptist Church family to send medical supplies directly to her hometown in the country.

Upon hearing updates about how bad the situation in the country was, Moss told Baptist Press she knew she had to do something.

“It felt very bad to sit here comfortably and have normal life when people’s lives in Ukraine are just being destroyed over the course of a day,” Moss said. “It felt awful that we were sitting here and not doing anything and not helping.”

Moss partnered with other friends throughout Lake Charles, including others from Ukraine, to collect medical supplies to be sent to the country to provide immediate relief.

She sent supplies, including formula, diapers, clothes and medication, to her hometown of Zaporizhzhia, a city in the southern region of Ukraine near the border with Crimea. Sending them there directly will allow them to be distributed immediately to her former townspeople, rather than their having to wait for supplies to be delivered from other parts of the country.

Moss had already collected and sent several boxes of supplies to Zaporizhzhia before approaching her pastor at Trinity Baptist, Steve James, to see if the congregation could help. The responded in a big way, she said. Thus far, Moss and her partners have shipped 24 boxes containing more than 1,000 pounds of supplies.

Moss said she has been a part of Trinity since coming to the U.S. in 2006, and was even baptized at the church several years ago. She said seeing her church family support her efforts has been extremely uplifting.

“I feel very grateful,” Moss said. “It was very heartwarming because a lot of people talk about things and will pray for you, but Trinity was actually able to provide supplies and things to help. People being understanding of what’s going on is one thing, but to meet somebody who actually wants to help and do whatever they can is beyond amazing.”

Although several of her family members and friends have stayed in Zaporizhzhia to help with relief efforts, Moss said many have fled to surrounding countries.

The remaining family members staying in Zaporizhzhia include Moss’ father, aunt and uncle, all of whom are helping in the city in different ways.

Her father assists refugees (according to Moss there are more than 45,000 in the city), while her uncle works in a meat factory producing food and her aunt serves as a volunteer hairdresser.

Moss’ parents celebrated their 42nd wedding anniversary on Feb. 22, just before the invasion began on Feb. 24. Though they are now separated, Moss’s father was adamant he and his wife would meet again, hopefully back in Ukraine rebuilding the country when the crisis is over.

Steve James, senior pastor at Trinity Baptist, said having Moss as part of the church family has helped humanize the crisis in Ukraine. He added that the Lake Charles area has experienced its own difficult circumstances over the last several years in the form of several natural disasters.

The last few years have included a flood, a tornado and several hurricanes. Some church members are still in the process of returning to their own homes. The town’s own difficulties have helped the congregation identify with the people in Ukraine, he said, while acknowledging that their situation is even graver than what his community has been through.

“When you can put a name and a face to a place it makes all the difference,” James said. “They (Moss and other Ukrainians in the church) are a part of our family. Our church members can realize ‘I am not the only one in crisis.’”

James added that several church members are preparing to be a part of relief teams headed for the countries surrounding Ukraine such as Poland.

Teams will begin leaving as early as Friday (April 1) and continue to deploy throughout the spring.

Moss said the crisis has reminded her of the importance of Christian unity, and of rejecting a spirit of hate.

“God never allowed the seed of hate in my heart for what is going on to be placed in my heart,” Moss said. “I see why people fall into that, but hate is not the answer and it’s not going to do you any good other than drag you down.

“What I actually see positively is how kind and friendly people all over are being, even people that we have never met … It feels great that we all are working for the same cause of helping people, saving people and our city.”