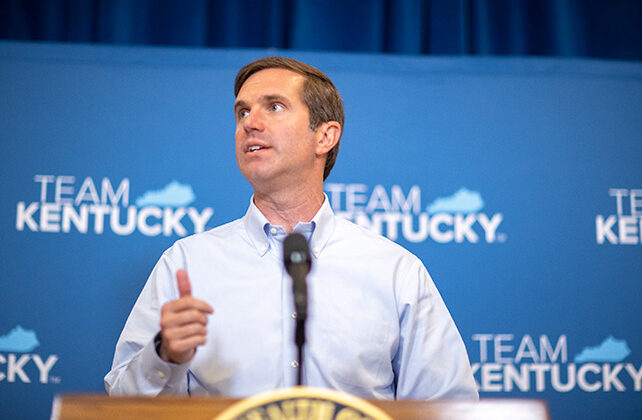 FRANKFORT, Ky. (AP) Kentucky’s contract renewal with a Baptist-affiliated children’s agency remains in limbo, but the state is continuing to place youngsters in its care, Gov. Andy Beshear said Thursday.

The monthslong dispute revolved around a clause in a new contract with the state that banned discrimination based on sexual orientation and that Sunrise Children’s Services refused to sign.

Sunrise has since been offered a revised contract reflecting what it had requested, with “a line in two different sections eliminated,” the Democratic governor said at his weekly news conference.

“Sunrise has responded by saying that’s no longer their position and they now want significant additional terms written into the contract,” Beshear said. “So at this point, there is not resolution but they have the contract they asked for, right there ready to sign if they’re willing.”

Sunrise officials say the disputed clause would have compelled them to violate deeply held religious principles by sponsoring same-sex couples as foster or adoptive parents. Sunrise is affiliated with the Kentucky Baptist Convention, consisting of nearly 2,400 churches with a total membership of about 600,000 people. The faith views homosexuality as a sin.

Supporters of the provision see it as a safeguard against discrimination.

The state offered the contract change after a recent U.S. Supreme Court ruling, which Sunrise’s attorney contended fully applied to the Kentucky dispute. In the Pennsylvania case, the high court unanimously sided with a Catholic foster care agency that said its religious views prevented it from working with same-sex couples as foster parents.

Beshear’s administration had set a June 30 deadline for Sunrise to sign a new contract. If it refused, the state had threatened to stop placing children with the agency.

But the governor said Thursday that children are still being placed with the foster care and adoption agency. Sunrise also offers residential treatment programs, serving some of the state’s most vulnerable children.

“We’re not cutting that off at the moment,” the governor said. “Kids are still being placed there.”

Sunrise’s attorney, John Sheller, said Thursday that any additional language being sought is needed to comply fully with the Supreme Court ruling in the Fulton v. City of Philadelphia case. The state also has asked for changes or clarifications in the contract, he said.

“Every clarification requested by Sunrise is either something required by Fulton, something it requested before, or something KY has accepted in the past,” Sheller said in an email. “We look forward to completing the process soon and we presume KY feels the same.”

Beshear, a former state attorney general, acknowledged that the Supreme Court ruling “might not be directly on point” in regards to the Kentucky matter but was “pretty close.”

The governor said Sunrise has been a “good provider” of services. While discussing the latest snag in negotiations, Beshear added: “There is capacity in this state to make sure that every child that needs help is helped, with or without them.”

“So I hope they’ll put those kids first,” he said. “That language no longer appears in the contract they’ve been offered. But this isn’t a chance to negotiate for more on top of something. You’ve gotten what you’ve asked for. Let’s make sure that we can serve them.”

Kentucky consistently has some of the nation’s worst child abuse rates.

Formerly called Kentucky Baptist Homes for Children, Sunrise’s history dates to caring for Civil War orphans. It has contracted with the state for 50-plus years.

Hudspeth Blackburn is a corps member for the Associated Press/Report for America Statehouse News Initiative. Report for America is a nonprofit national service program that places journalists in local newsrooms to report on undercovered issues.