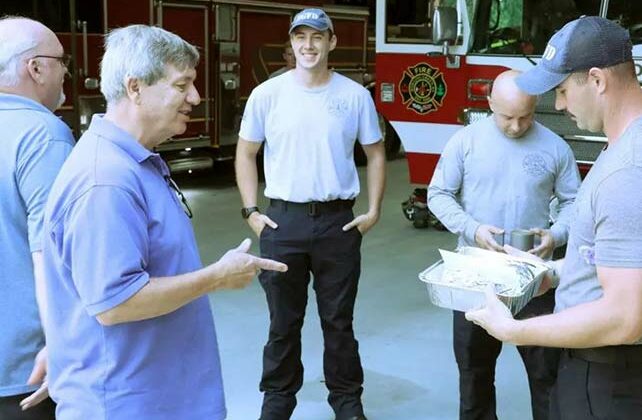 EDITOR’S NOTE: This story has been updated to reflect the length of time Forest Park Baptist Church has hosted the first responders’ event.

BOWLING GREEN, Ky. (BP) – The early morning hours of the second Monday in September have been set aside for community outreach over the last twenty years at Forest Park Baptist Church in Bowling Green. The Iron Men, the church’s men’s ministry, roll out of bed long before the rooster crows to prepare a feast for local first responders as well as local men and women who are distributing Bibles to students at Western Kentucky University (WKU).

John Daniel, one of the event organizers, says at the beginning, dozens of first responders would come to the church facility to attend the breakfast buffet. “We’d have a parking lot full of fire trucks and police cars,” he told Baptist Press.

“It’s been a way for us to show our gratitude to the people who risk their lives to serve the community.”

Daniel says COVID caused them to scale back the event. Now, they deliver breakfast to the different stations where first responders await the call to help those in need.

“No matter the circumstance, we want to let them know we appreciate them,” Daniel said.

A few years ago, the Iron Men added the Gideons to the list of those who enjoy the breakfast. Nearly two dozen men and women gathered Monday (Sept. 12) to eat, receive instruction and then try to distribute thousands of Bibles to students walking to class on a beautiful late summer morning.

The Gideons International is “an association of business and professional men and their wives dedicated to telling people about Jesus through associating together for service, sharing personal testimony and by providing Bibles and New Testaments.”

For many years Gideons have been standing on the public sidewalks at WKU offering a Bible to anyone who wanted one.

RELATED: 3 Reasons Your Church Should Care for First Responders

Daniel says feeding them offers a two-fold benefit to the Iron Men ministry. It allows them to feed the volunteers a hearty breakfast before they pound the pavement, and it generates a beneficial income for the group.

“They pay us a small amount of money which we’re able to put into a fund that we use later in the year to give away holiday meals,” Daniel said.

He sees the morning as a way to serve the community both now and later.

“It’s really been a combination of good outreach for the community and for people that need some support around the holiday season,” he said.

The interaction with the first responders has generated an ongoing relationship that has extended to the community around the church, Daniel said.

RELATED: How to Unite a Community – 5 Ways

“We’re in an underserved neighborhood in Bowling Green,” he said. “This gives the kids an opportunity they might not ordinarily have.”

As the dishes are cleaned up after another year’s breakfast, Daniel says enduring the 3:30 a.m. wakeup call is worth it.

“It gives us a bond here at Forest Park. As we fix breakfast, we’re reminded to serve the community.”