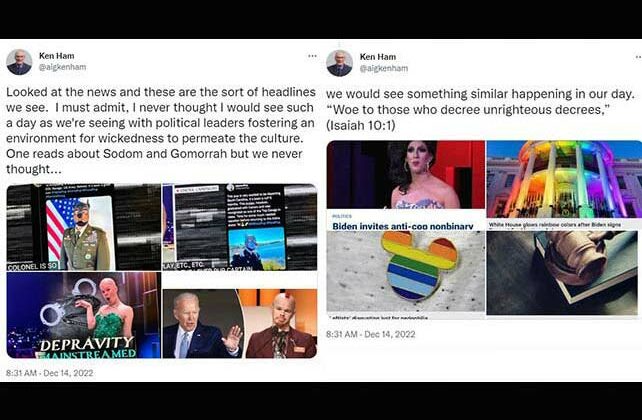 Earlier this week, apologist Ken Ham posted a series of images including some of the nation’s top leaders who are a part of the LGBTQ+ community, saying that he never thought he’d see the day when our culture exemplified the likeness of Sodom and Gomorrah.

“Looked at the news and these are the sort of headlines we see,” Ham tweeted. “I must admit, I never thought I would see such a day as we’re seeing with political leaders fostering an environment for wickedness to permeate the culture. One reads about Sodom and Gomorrah but we never thought we would see something similar happening in our day. ‘Woe to those who decree unrighteous decrees,’ (Isaiah 10:1).”

The images included a retired military colonel who posed in his uniform wearing a “pup play” mask, which is a part of a sadomasochistic activity wherein men behave like young dogs during a sexual encounter, typically with other men.