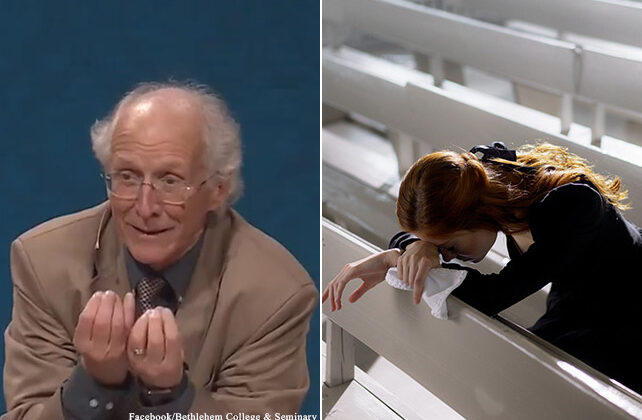 A listener recently asked the theologian John Piper on his ‘Ask Pastor John‘ podcast, “How can I say that I have repented if I commit the same types of sin over and over?” The listener, “Doug,” said he often is “seized by depression” when he thinks of having to ask for repentance over and over again for the same sin.

Piper responded by first telling all his listeners, “Doug’s question is one of the most common questions that an honest and serious Christian has to ask.” This question is an “urgent” and “common” one within the lives of honest Christians.

Piper said its incorrect to use the word repentance for habitual sins we commit. He pointed to language in the New Testament, specifically in 1 John 1:8-9, where the word confession is used instead of repentance.

The 75-year-old theologian said, “Any thought, any attitude, any word, any facial expression, any gesture, any action that does not flow from a treasuring of Jesus is sin….Sin is a condition of the heart that is bent away from God in preference for other things, and sin is any expression of that preference in our mind or attitude or behavior.”

When the Bible uses the word repentance in the New Testament, it is referring to the experience Christians have when they surrender their life to Christ, Piper continued. Repentance happens if a Christian’s life “takes a terrible turn into a path of destruction from which we need to be called back,” he said, and referenced the beginning chapters from the book of Revelation.

Piper defined two different types of confession. One type of confession is an expression of guilt and sorrow for a sin that one really has no faith they can’t control themselves in giving into it again. He gave five different examples, one of those was this: “I’m going to respond in a belittling way to my wife when she looks that way at me again, probably two days from now.” Meaning the confession is “superficial” and is a “cloak for fatalism” regarding those type of sins. He called this an “I feel bad about them, but I can’t help myself” type of mentality.

The other type of confession is like the first in that a person feels guilt and sorrow for sins, but different in that the person chooses to wage war on the sin itself. “You aim, by the power of the Holy Spirit, to defeat it,” Piper said. “You plan to rob the sin of its power over you.”

The ‘Desiring God’ author gave two different types of sin a Christian commits, one that “blindsides you” and one that is “premeditated or planned.” Describing a blindsiding type of sin, Piper gave examples of some he experiences, such as “spontaneous, unkind words that just pop out of my mouth.” He said that sin leaves him ashamed as soon as he says the words. He said another might be when an advertisement ignites an old memory of something that leads to a sinful, sexual thought.

Planned or premeditated sin is something one thinks about before committing, Piper said. “You actually sit there or stand there weighing whether to do it or not.”

How Much Sinning Proves That I’m Not a Christian?

“I don’t think we can provide a list of sins or a number for the frequency with which you can sin and get away with it,” Piper said. He added that it is more dangerous for a Christian’s soul to get into a habit of premeditated sin because confession is cloaked with fatalism and hopelessness, and one develops a peace with sin. “Both are dangerous; don’t get me wrong,” Piper said, and cited the Apostle Paul’s letter to the Romans where he said, “I do what I do not want, and I do not do the good I want,” calling himself a “wretched man” and fleeing to Christ for cleansing.

In further response to his listener’s question, Piper said, “To the degree that your confessing of sin has made a kind of fatalistic peace with sin’s inevitability, and to the degree that your sin falls into the category of premeditated unrighteousness, to that degree, you should be frightened that you are on a path that may well lead to destruction.”

We will never be sinless until we are made holy in the presence of Christ and it is obliterated for all eternity, therefore with the power of the Holy Spirit’s help we must wage war on that sin until that day, Piper said.

In a sermon Piper delivered at the Desiring God National Conference in 2004 titled ‘Sex and the Supremacy of Christ’ he gave a powerful description of how savoring the supremacy of Christ helps us wage the war on sexual sin in our lives.

Placing anything above the supremacy of Christ, especially sex, will misalign how we were created by God, Piper asserted. He said, “We were made to see and savor, with everlasting satisfaction, the supremacy of Christ.” Because our sexuality points to this we “must know this in order to be pure and have our sexuality be sacred and sweet and Christ-exalting and secondary — quietly, powerfully secondary.”

Piper told the audience, “I know without the shadow of a doubt, on biblical authority, that the little spaceships of our moral regimes — our little tactics to fight lust, our little spaceships to nudge the planet of our sexuality back into orbit — are absolutely futile if the supremacy of Christ is not the sun at the center of the solar system of our life,” he said. “I know that. I don’t know many things. But I know that beyond the shadow of a doubt.”