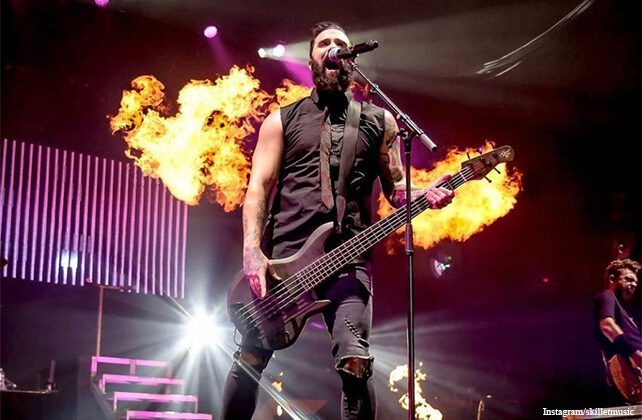 The Popular Christian rock band Skillet announced Tuesday that it wouldn’t play at venues that mandate concertgoers be COVID-19 vaccinated to attend shows.

The outspoken rocker said performing at venues that mandate vaccines is something he is “unwilling to do.” The other members of Skillet, Cooper’s wife and guitarist Korey, drummer Jen Ledger, and lead guitarist Seth Morrison share the same sentiment as their lead singer.

Breaking down what the band’s convictions about mandates means, Cooper told fans that the band will only be playing concert venues that allow non-vaccinated attendees to bring a negative COVID-19 test result to gain entry to the show.

“I’m not going to lie to you guys,” Cooper said, “I don’t like this either. It is not ideal.” The Awake & Alive to Truth: Finding Truth in the Chaos of a Relativistic World author laid out two options the band is currently faced with. Option one is to cancel the tour and option two is to play venues that allow fans to bring a negative test result for those who aren’t vaccinated.

“I know this is going to make people disappointed on all sides of the fence for all sorts of different reasons. That’s not my aim,” Cooper said. “It’s just a really difficult time.”

Cooper said Skillet wants to treat fans to a great rock show and has no intentions of disappointing people with their upcoming tour decision. While some churches have announced they require proof of a COVID-19 vaccination in order to gather within their buildings doors, Cooper indicates that not wavering in his convictions will result in not being able to please everyone.

Cooper’s explanation on Instagram alone has been viewed over 82,000 times and resulted in hundreds of comments, most of which praise Skillet for its decision and for not bending on their convictions.

One commenter wrote: “I LOVE THIS!!!! Thank you for the clarification, I’m with you 100%. Choices are so so important. PROUD OF YOU.”

While another said, “I respect you even more for sticking to your own convictions even through this. Rock on, and more importantly God bless you all.”

Related article: Skillet’s John Cooper Shares Why He Is Now Speaking Out

“Love this!!! We need more bands, singers, professional sports teams to STAND UP and refuse to play if stadiums are going against our health rights by denying us entertainment due to our vaccine status,” one fan said. “THANK YOU for using your platform to do so! Hoping you guys get a killer tour!”

Some vaccinated fans spoke up for venues requiring negative tests: “I’m vaccinated, and I am in no way standing on a soapbox to change anti-vaxxers minds. However, to say that proof of a negative test is wrong, too, doesn’t sit well with me. Venues are doing their best to keep people safe and healthy. Also, from what I’ve seen; most anti-vaxxers are also anti-maskers. So one COVID-positive person can infect an ENTIRE arena. I guess that’s why I don’t see any Philly venues on your list…because most if not all of them are requiring at least a negative test.”