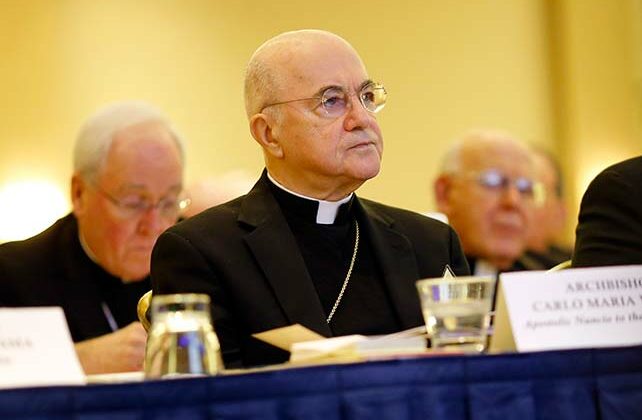 ROME (AP) Italy’s Catholic military chaplain has pushed back strongly against calls by a former Vatican ambassador for the armed forces to resist COVID-19 vaccine mandates, saying the ambassador’s “conspiracy theories” were a source of confusion and disinformation.

Archbishop Santo Marcianò penned a letter to Italian law enforcement personnel in response to the latest missive from Archbishop Carlo Maria Vigano, the Vatican’s onetime U.S. ambassador who went rogue in 2018 after calling for Pope Francis to resign over the clergy sexual abuse scandal.

Vigano’s anti-Francis missives have become increasingly unhinged, especially during the coronavirus pandemic, which he has denied and termed a criminal pretext by a “globalist oligarchy” to enslave humanity. He nevertheless has some supporters and recently appeared via video at a protest in Rome where he called for acts of civil disobedience to resist vaccine mandates.

Marciano didn’t identify Vigano by name in his letter on Monday to Italy’s armed forces, but he was clearly referring to him when he recalled that a “former apostolic nuncio, noted for his conspiracy theories, has recently urged men and women in law enforcement to acts of disobedience.”

Marciano said he felt the need as a pastor to address the military in light of such “extreme positions that are in dissonance with the directives of health and public authorities as well as in open contrast with the indications of the church.”

His aim, he said, was “to strengthen their commitment and reassure their consciences, reaffirming the position of our Church in terms of vaccination against Covid 19, filially and decisively aligned with the teachings and testimony of the Holy Father.”

Italy has required health care workers, teachers, law enforcement personnel and everyone over age 50 to be vaccinated. It has maintained strict mask mandates indoors and out and is beginning to see a sharp decline in daily cases following the latest omicron-fueled spike.

Omicron is less likely to cause severe illness than the previous delta variant, according to studies. Omicron spreads even more easily than other coronavirus strains, and has already become dominant in many countries. It also more easily infects those who have been vaccinated or had previously been infected by prior versions of the virus.

Marciano thanked Italy’s armed forces for their service and recalled that both civilians and military have a responsibility to protect their own lives and those of others.

Marciano is one of the few prelates to publicly push back against Vigano, a leading Francis critic whose missives are usually ignored by the Catholic hierarchy.