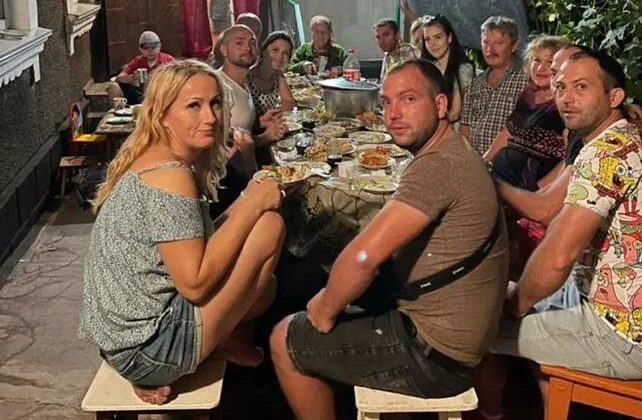 LAWRENCEVILLE, Ga. (BP) – Olha Soroka, 85, walks through the rooms of her home. She smells the roses from her garden and can hear the laughter from family dinners. She touches and kisses the walls, the ones that witnessed the years of raising children with her husband.

Then she wakes up, and the tears return.

Soroka and her daughter, Svitlana, arrived in Atlanta on June 15 and have since found community at The Lighthouse Church, a Russian-speaking Southern Baptist congregation in Lawrenceville, Ga. The road to get there, though, required much prayer and help from others to escape the siege of their hometown, the Ukrainian port city of Mariupol, after it was besieged by occupying Russian forces.

“Half of our church is Ukrainian and the other half from other areas of the former Soviet Union,” said Pastor Max Lisovskiy, whose family’s Baptist beliefs had placed them under the eye of authorities going back decades. Lisovskiy says it led to his grandfather’s murder in 1937 by the KGB and, ultimately, to his family’s leaving Russia in 2006 as President Vladimir Putin’s power continued to grow.

“We began receiving refugees in April,” he said. “We hear their stories, pray for them and support them however we can.”

While other headlines may have pushed the war in Ukraine away from many Americans’ attention, it’s an inescapable daily discussion point in Lisovskiy’s church.

Soroka and her husband, Volodymyr, moved to Mariupol in 1959, where he found work as a steel worker. They raised two children, a boy and a girl, in the home they built on the edge of the city.

“It was a simple city,” said Soroka, whose husband died many years ago. “Over the last 10-15 years, it grew into a wonderful, modern European city. It was beautiful and people wanted to live here.”

“I remember the happiness,” said her daughter, Svitlana Kuznetsova, 55. “It was my hometown and our house was the center of it. Leaving there was like leaving my heart and soul.”

Soon after Russia invaded Ukraine in February, it became apparent that Mariupol was one of its prime targets.

As the bombing drew closer and neighborhoods with no apparent military significance nevertheless became targets, Svitlana insisted her mother and other relatives move to her eighth-floor apartment in the middle of the city. The original plan was to wait three days until things got safer, but that grew into weeks.

The decision to leave saved their lives. Word came that a bomb had destroyed their neighborhood, including the house. Soroka wouldn’t believe it until seeing for herself.

One day, a bomb damaged the fifth floor of Kuznetsova’s apartment building. The city was fully occupied. With no water, electricity or medicine, the level of desperation grew by the day. Sparse communication sent sporadic word to the Atlanta area, where Kuznetsova’s daughter, Olga, and her other children in America were working feverishly to secure documents for refugee status.

“One day my daughter told me there was a man who could help us get out of the city,” Kuznetsova said. “We followed him in my small car, avoiding the military checkpoints. At times we drove where there were no roads, just woods or a field. We had to change tires a couple of times.”

It took several hours, but they made it out of Mariupol to the city of Berdyanks’k after a month-and-a-half under siege. It was the end of March.

After Berdyanks’k, the group moved to Zaporizhzhia. Both cities were also mostly occupied by invaders. Kuznetsova remembers watching locals drive at high speeds down streets, choosing to risk their lives with a crash rather than make themselves easy targets for Russian military.

What Zaporizhzhia did have that the previous two cities didn’t was medicine, which had become vital for her 85-year-old mother and was available in an unoccupied area.

They would stay in the city for several days, cared for by churches and local police. It was during this time that other family members went in different directions, with the two women continuing to America. Zaporizhzhia had almost become fully occupied, so they drove to Kropyvnytskyi, staying nearly two months.

Members of another local church cared for them, as did a compassionate businessman and political leader. He closed down one of his toy stores and cleared out living space for Soroka and Kuznetsova. They received food, medicine and a place to shower in the nearby fitness center, also owned by the businessman.

Kuznetsova’s children in America were able to secure the proper documentation during this time. The mother and daughter drove five hours to Odesa, near the border with Moldova. That city was also cramped with refugees, but friends were able to secure a spare apartment for them.

The trip to the Moldovan border meant goodbye to their homeland as well as those who had helped them. It also meant goodbye to Kuznetsova’s car, not designed for much of the terrain it had endured over the previous 700 miles or so and now on the edge of collapse.

After five days in Moldova, a series of flights to Vienna, New York and Atlanta brought them to family in America.

They have much for which to be grateful, though the pain of the ongoing war in Ukraine persists.

“It is my birthplace,” said Kuznetsova. “The atmosphere, the people – it was like a big family. The occupiers are trying to create something different there, but all they are creating is a big cemetery.”

Their path out also brought a bigger sense of God’s family.

“I cannot explain the beauty of the people in Mariupol,” Soroka said. “It began with our church. We had a big choir and a lot of kind people. During our travels, though, we saw God’s mercy and His hands through those who helped us at all points of our escape. Christian people are throughout the world and are our family.”

The Lighthouse Church was inconceivable to them when the journey began – a church in America where the people spoke their language and sang their hymns. This is needed more than many realize, as her church in Mariupol no longer exists due to the war.

“I’m grateful that in this church (Lighthouse) I see my church family in Mariupol,” Soroka said. “God is everywhere and His family is so big. I praise Him for this country and this church that has become our shelter. Its name is Lighthouse, and it has become that.”