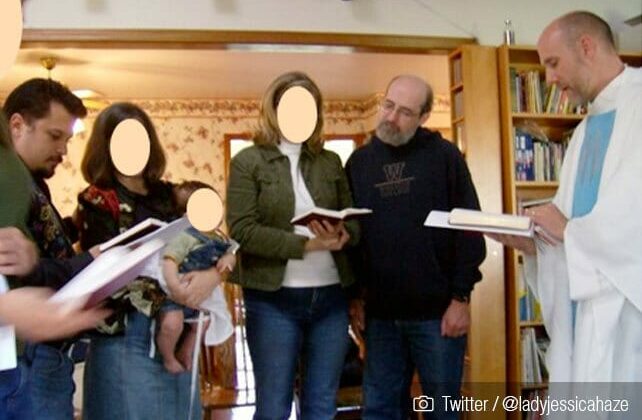 (RNS) When Cherin Marie joined Christ Our Light Anglican Church in Big Rock, Illinois, in 2013, she trusted that the community of a few dozen — many of whom were family members, longtime church friends or neighbors — would care for her and her kids.

Her great uncle, the Rev. Rand York, was the church’s priest, an aunt was a member of the core team that started the church and her next-door neighbor, Mark Rivera, was a lay catechist, or minister. Cherin herself served on the vestry — the church’s governing board — and as a Communion and prayer minister. She also played cello on the worship team.

Cherin had met her husband at the church, and at the wedding, at which York officiated, Rivera was a groomsman.

In May 2019, Cherin’s 9-year-old daughter told her that she had been abused by Rivera. She reported the alleged abuse to York, believing that her great uncle and the others in church leadership would protect her daughter.

According to Cherin, who asked that her last name not be used in order to protect her daughter’s identity, church leaders not only failed to report the allegations to the police or to the Department of Children and Family Services, but some also pressured her not to go to the police.

Despite this pressure, Cherin reported the alleged abuse to the police. In June 2019 Rivera was arrested and later charged with felony child sexual assault and abuse. He is currently out on bond.

“That position of spiritual authority was monumental and central to the trust I had in him, and the access he had to my children,” said Cherin. “He was well-established as a church leader, even within the diocese. He attended diocesan events as a Christ Our Light leader and representative.”

Cherin’s story also became public on social media, giving rise to claims that some other church leaders, including Bishop Stewart Ruch III of the Anglican Upper Midwest Diocese, mishandled the allegations. Ruch, who has admitted making “regrettable” mistakes in handling the allegations, has taken a leave of absence.

Officials from the Anglican Church in North America will now oversee an investigation into how Ruch and some other church leaders handled the crisis.

Christ Our Light Anglican, which its members often call COLA, was founded as part of the Greenhouse Movement, a church planting movement in the diocese. The new church was initially planted by members of Church of the Resurrection, located in a Chicago suburb about 30 miles away, which is the diocesan headquarters. Cherin and Rivera were among that group.

From the beginning, Cherin said, Rivera played a significant role in COLA’s daily operations. Previously, he had held several volunteer leadership positions at Church of the Resurrection. As catechist at COLA, Rivera oversaw the details for church services, served Communion, mentored youth and preached sermons.

After her daughter made her allegations against Rivera, Cherin said she told York. In that May 18, 2019, meeting, Cherin said York expressed grief and assured her and her husband that COLA would pay for their daughter’s counseling and support them during whatever came next. He also said he would immediately contact the Rev. William Beasley, who was the Greenhouse Movement’s dean (a leadership title in the Anglican Church).

But, according to Cherin, after York confronted Rivera privately, he called a meeting between Cherin, Rivera and Chris Lapeyre, senior warden and worship pastor at COLA and a visiting assistant lecturer at nearby Wheaton College.

“I felt strongly pressured not to report Mark,” said Cherin.

In a conversation with RNS, Lapeyre said he had been trying to interpret what the law required during the meeting. “What I meant by saying that she did not have to report was not to say that she should not, but to say that she was not required to . In other words, as a parent, it was up to her discretion,” said Lapeyre. He said that after the meeting he encouraged Cherin to report the abuse allegations.

Lapeyre said the same was true for the advisement to York: Philbrick hadn’t instructed York not to report the allegations; rather, he was trying to clarify whether the situation required York to act as a mandated reporter. (According to the Illinois Department of Children and Family Services’ Mandated Reporter Manual, any clergy member is “required to immediately report to the Department when they have reasonable cause to believe that a child known to them in their professional or official capacities may be an abused child or neglected child.”)

In an email to RNS, York said he was not a mandated reporter in this instance, saying it was a police matter and not under the purview of the Department of Children and Family Services. He said he spoke with DCFS and Kane County Detectives at some point and was cleared by them. “Indeed,” York said in his email, “had I not done as the mother asked me, it could have created additional problems.”

He did not explain why he thought this was not a DCFS matter, but Lapeyre said because Cherin’s daughter had originally come to know Rivera in a personal capacity, and because he believed the allegations were not connected with the church, Philbrick did not think York was required by law to report the alleged abuse to the police or to the DCSF.

“You don’t need to be a mandated reporter to make a call to the authorities,” said Christopher Nelson, chief of staff and communications for the Kane County State’s Attorney’s Office. “All you need is reasonable suspicion, and you can make a call in good faith.”

York also claims that Cherin asked him to wait to report to the authorities until she decided what to do, an assertion Cherin disputes. “I never in any way encouraged Rand to stand back while I made up my mind,” Cherin wrote in an email to RNS. “Never at any point did I request that Fr. Rand, or any other church leader, not disclose my daughter’s allegations to the authorities.”

According to Cherin, she met with Lapeyre outside after the meeting and told him that the allegations against Rivera were extremely serious, without sharing the details. At that point, according to Cherin, Lapeyre admitted Cherin ought to report Rivera.

As the COLA community learned of the allegations against Rivera, Cherin said an additional COLA member pressured Cherin not to go to the authorities. Cherin reported the allegations to police on Monday morning.

Although the police told Cherin the DCFS would not be involved, the DCFS did pay Rivera’s wife and four kids a surprise visit. According to Cherin, that visit was a key reason other COLA members chose not to support her or her family.

“Rand (York’s) wife, Kay, has never spoken to me since that happened,” said Cherin. “Father Rand canceled my infant son’s baptism without an explanation. He said he had a lot going on that he needed to handle. Shortly after he cut off contact with me for four weeks, until he emailed me and asked me to resign from the vestry.

“Overnight, we lost all of our community and friends, all of our support,” said Cherin. “We lost my children’s best friends since infancy. And we just were on our own.”

In an email to RNS, York said he visited Cherin’s family regularly and brought them Communion on multiple occasions. York also said Cherin’s position on the vestry was a conflict of interest because the panel was providing financial assistance to both Cherin’s and Rivera’s families.

Cherin said York stopped by for a “sterile five-minute prayer session” shortly after she reported Rivera but otherwise cut off contact for weeks. While COLA did pay for her daughter’s first four counseling sessions, Cherin said that her family did not receive financial assistance from COLA after she was removed from the vestry.

Although Rivera was stripped of the title of catechist the day after Cherin shared the allegations with Rand, none of the clergy who had been informed of the alleged abuse — including York and Beasley — reported it to the police.

Cherin’s description of events stands in sharp contrast to the picture painted by Bishop Ruch in his June 29 update to the diocese regarding the abuse allegations.

Ruch wrote: “Local authorities were immediately contacted on multiple occasions with new information and safety concerns. We have sought and continue to seek to care for victims.”

Beasley and Ruch did not respond to requests for comment.

Though no longer catechist, Rivera continued to be an active member of COLA until his arrest on June 10, 2019, three weeks after Cherin told church leaders. Meanwhile, Cherin said she and her family returned to her childhood congregation, Church of the Resurrection, to seek support.

Within a few days of their arrival, Cherin informed Resurrection leadership of the allegations against Rivera. While the church provided a therapist referral for her daughter immediately, Cherin said the pastoral care team didn’t meet with her until a month after their arrival.

“I shared with them that in the month while we had been waiting for pastoral care, I had heard five additional stories ranging from grooming to predatory to abusive to assault, all from Church of the Resurrection members,” said Cherin. “I also named two additional vulnerable youth that certainly were showing common warning signs of sexual abuse and that Mark had ongoing access to.”

Deacon Val McIntyre, head of pastoral care at Church of the Resurrection, said she would report the allegations to Ruch and promised personalized pastoral care plans for each member of Cherin’s family. Although Cherin sent follow-up emails, she said the plans were never delivered.

“I would prefer not to respond through the press to her accusations as I believe it would only add to the hurt she has already suffered,” McIntyre told RNS. “I stand with her in solidarity and hope that her grievances with all the parties involved can be fully, fairly and impartially investigated.”

Cherin eventually learned the bishop had attended Rivera’s first court hearing along with other members of COLA.

“There were many hearings where either my husband or I were completely on our own. At the time, we had an infant, so one of us had to be home with him,” she said. “And Mark had a whole group of support from Christ Our Light. Father Rand, Chris Lapeyre and other COLA and community members there surrounding him, and we were all by ourselves.”

Lapeyre told RNS he attended the court hearings specifically in support of Rivera’s wife and kids.

“The family had just lost their only source of income when Mark went to jail and were experiencing financial and emotional hardship,” said Lapeyre. “People focus on the accused and the victim, and the accused’s family gets erased from consideration. They are hurting, too, and whether or not they believe Mark, they need support.”

During this time, Church of the Resurrection did not make any announcements about the allegations against Rivera, who had been in various volunteer leadership positions at the church from the mid-1990s until 2013, according to Cherin.

As news of Rivera’s arrest spread, Cherin said members at Resurrection began distancing themselves from her family. Cherin and her family left the church in August 2019.

It was only in May 2021, two years after Cherin’s daughter first came forward, that the allegations against Rivera were made public in a letter from the bishop.

“Because the church never communicated anything to the congregation, all that was talked about at Rez was Mark’s narrative,” said Cherin, using a familiar abbreviation for Resurrection. “And it cost me my childhood church.”

“We’ve not even begun to recover from that. It’s hard to feel safe connecting in a new Christian community,” she said.