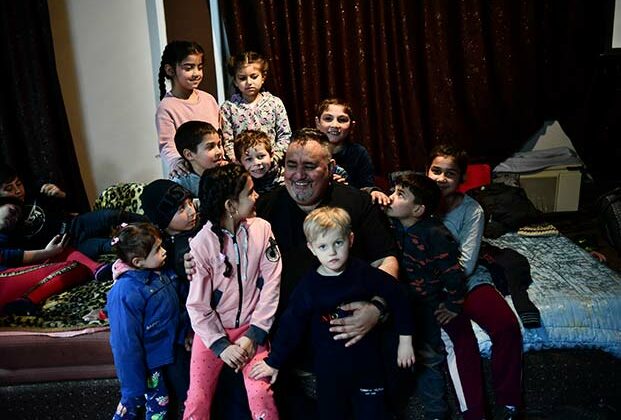 USZKA, Hungary (AP) — It took two days and sheer determination for the family of 27 women and children from Ukraine’s Roma minority to escape the violence of Russia’s invasion and reach neighboring Hungary. Then they faced the next challenge: not being split up by aid groups trying to help.

That all changed when the pastor of a village church took them in.

Edgar Kovacs, who leads the Free Christian Church in the Hungarian village of Uszka, on the border with Ukraine, offered up the only room in his church to house the large family, which had fled from the western Ukrainian village of Didova Hora as Russian attacks intensified.

Kovacs, who is also Roma, said as both a Christian and a Roma, he felt it was his duty to help the family.

“I have a big family, so when we heard on the news what happened next door, our hearts began beating faster, and my whole family and I tried to help,” Kovacs said.

Upon crossing Hungary’s border on Wednesday, the Hungarian-speaking family — 20 children and seven women — was offered accommodation by local volunteers. But, determined to stay together, they turned down offers that would have separated them until Kovacs offered space to them all.

“We’re one family and very concerned about each other. We agreed, whatever happens, not to separate, and we’ve stuck to this,” said Ildiko Kulcsar, who led the family to safety in Hungary. “We’re all in the same place together, thank God!”

Ukraine’s westernmost regions, which border Hungary, are home to some 150,000 ethnic Hungarians, many of whom are Roma who share Hungarian language and culture. While Russia’s invasion has not yet extended to Transcarpathia, which is separated from the rest of Ukraine by the Carpathian Mountains, many have decided not to wait for the situation to get worse.

According to UNHCR, the U.N. refugee agency, more than 1.2 million people have left Ukraine since the fighting began on Feb. 24, an exodus without precedent in Europe this century for its speed. The agency says over 144,000 of those refugees have fled to Hungary.

Kovacs said in addition to providing accommodation and food to the refugee family, he aimed to offer them spiritual assistance as well — adding they can stay as long as they want.

“Ordinary people are the losers when leaders can’t agree. They’re the ones who really lose a lot,” he said. “That’s why here we try to help people, not only financially, physically, but also mentally.”

Kulcsar, the mother of four, said she left Ukraine to ensure the safety of her 9-year-old daughter, Klara, who suffers from a chronic heart valve disease.

“I had to make a decision to keep my daughter safe because I was afraid that if she got worse, I wouldn’t be able to find a doctor,” she said.

In a huge policy shift, Hungary’s government, which has been strongly anti-immigration for years, has said it will allow all citizens and legal residents of Ukraine to enter the country.

Ukraine’s government has prohibited men aged 18 to 60 from leaving, but two of the men from the Roma family were already working in Hungary when the war began. Now they have joined their relatives at the church in Uszka, swelling the family to 29.

While it was good to be all together, Kulcsar said the decision to flee was wrenching.

“It was very difficult to leave our home. After we left, I looked back and saw that some people had not yet left. But I have children, I feared for them more than anyone,” she said.