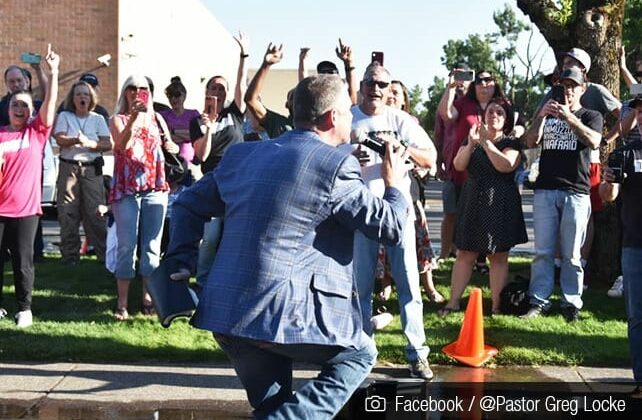 (ChurchLeaders) Two men were arrested after tensions escalated at an event held the evening of July 13 in Salem, Ore. by The Church at Planned Parenthood (TCAPP). Present at the event were counter-protesters, the Proud Boys, and Pastor Greg Locke of Global Vision Bible Church in Mount Juliet, Tennessee.

“CNN contacted me today to ask about what happened in Salem,” said Ken Peters, pastor of The Church at Planned Parenthood, in a post on Facebook. “It was nuts. While we were worshiping at Planned Parenthood on Tuesday Night… Pastor Greg Locke came up to me and pointed at a large mob of leftists coming towards us…The Salem police described it, ‘they arrived carrying bats, paintball guns and armor’. DID YOU GET THAT… A leftist mob coming after singing Christians praying for the end of abortion with Bats, Paintball Guns and Armor!!! The world has gone mad with evil.”