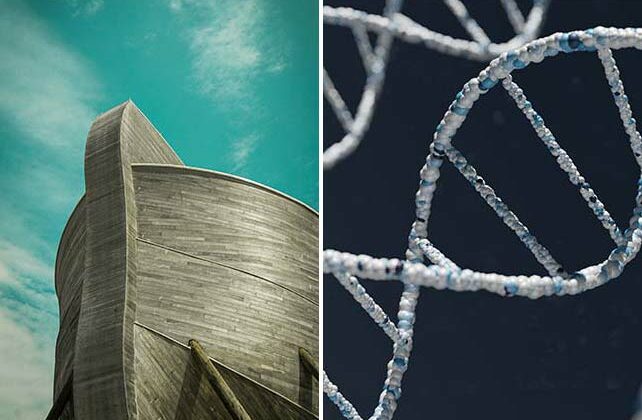 HEBRON, Ky. (BP) — One question puzzled Answers in Genesis researcher and biologist Nathaniel T. Jeanson for decades: What was going on in pre-Columbus America before Europeans arrived?

In finding answers, he traced his ancestry to Joktan, a great-grandson of Noah’s son Shem, introduced in Genesis 10:25. Jeanson points to a global generational family tree anchored in analyses of the Y chromosome.

“We can find a very clear, generation-by-generation echo of Genesis 10 and of Noah at the base of this tree. So that any male who gets a Y chromosome test, any family that has a male relative who gets a Y chromosome test, I can trace their ancestry back to specific sons of Noah,” Jeanson said. “What we discovered was a generation-by-generation family tree for global humanity, and this is based on DNA.

“This is now a tool for every single family line around the globe, in theory.”

In “Traced: Human DNA’s Big Surprise,” his book released in March, Jeanson uses research papers he co-authored, along with previously published data and historical accounts in reaching his conclusions.

RELATED: Is Belief in God Compatible With Belief in a Multiverse? Ken Ham Answers

“The principle behind this involved two concepts: (1) DNA naturally records a record of our ancestry. (2) Because the Y chromosome changes (mutates) every generation, DNA also records the passage of generations — the passage of time,” he explained in an email to Baptist Press. “Ancestry and time are the two key elements found in traditional family trees; the fact that DNA can also record these two elements of history allows it to be used as a surrogate for a family tree.”

Armed with a Ph.D. in cell and developmental biology from Harvard University, Jeanson augmented science with evidence such as the established history of peoples and regions of the globe, archaeology and linguistics.

“It is my work, but it’s based on a lot of published data that’s out there,” Jeanson said. “I’m taking existing data and reanalyzing it, primarily, as a method, and then lining it up with historical events that we know. I did have a number of reviewers who were checking the work, not authors.”

Jeanson describes Traced as a testament to the Bible’s veracity.

“This book is a very loud, strong confirmation of the biblical anthropology, which, that’s the heart, to me, of the Gospel,” Jeanson said. “That is one ancestor, one couple basically, ancestor for all of us who sins, and now we’re all sinners as a result. And of course, many of my opponents in science would say, ‘There’s no such thing as Adam and Eve, there was never just a single pair, there was always a population.’ Which if that’s true, was there a literal fall. Was there a literal Adam? … If there was never one man in the beginning, can one man save?

“I’d say this research confirms what the plain reading of scripture says. There was one man in the beginning. There was an ancient judgment that wiped out the globe, except for Noah, his wife, his sons and their wives. We all go back to those people. They sinned again and God has to confuse the languages,” he said. “All of this points to the global need for a Savior.”

The book purports a complex history that discredits the notion of race and with it, racial superiority or inferiority.

“This book has a dramatic impact on the discussion of race and ethnicity. What this book shows is what we’re calling races have actually changed multiple times in human history,” Jeanson said. “One example, there’s a low percentage of light-skinned Scandinavians who, you can look at their Y chromosome, and say you actually came from Arab Muslims who entered Europe in the Middle Ages. These Arab Muslims themselves, if you trace their ancestry back, go to northeastern Africa, likely to the ancient Nubians. And of course, the 25th dynasty of Egypt was ruled by the ancient Nubians.

“Imagine the school child who grows up learning what you call white and black and Asian and African, all these sorts of things, have changed multiple times, how can anyone make any argument for the supremacy of any race?”

Pre-Columbia America was ethnically dynamic, Jeanson said, as was all of creation since the flood.

“This was a big mystery to me growing up, just because we learned next-to-nothing about it. What we found is that, just like everywhere else in the world, that pre-Colombian Americas was a tremendously dynamic place,” he said. “There have been multiple settlings of multiple people groups in the Americas. One of the most dominant ones came around the Behring Strait several hundred years after Christ. This was a dynamic history and it’s organically connected to Old World events we all learned in school.”

The scientifically heady book includes summaries of key findings at the end of each chapter and is supported with 235 color plates. The Y chromosomal connection to Noah’s sons, dynamic ethnic changes, and confirmation of the timeframe of creation spanning 6,000 years are among the book’s key findings.

“Most people of western European descent are not indigenous European but arose from Central Asian migrants about the Middle Ages, and these people themselves are descended from a specific son of Joktan, a descendent of Shem in Genesis 10,” Jeanson said. “There’s no other history of peoples, that I know of, in print that does this. In part because most of what’s out there, mainstream science, uses a much longer timescale and in a sense, they’re not even looking for this sort of thing.”

Jeanson encourages Christians not to be embarrassed to believe that mankind was created 6,000 years ago, although scripture does not include detailed historical accounts of all mankind.

“This shows this is actually a scientifically workable model,” Jeanson said. “It leads to new discoveries about the world. This is the way forward in terms of doing science itself and is a testament to what the scripture says is true. In this particular example, it was the biblical framework that provided the context to make these discoveries.”

Among those who contributed to Traced, Jeanson cited to Baptist Press Ashley Holland, a statistician at Cedarville University, with whom he co-authored the study, “Evidence for a Human Y Chromosome Molecular Clock: Pedigree-Based Mutation Rates Suggest a 4,500-Year History for Human Paternal Inheritance,” published in the Answers Research Journal and used in the book.