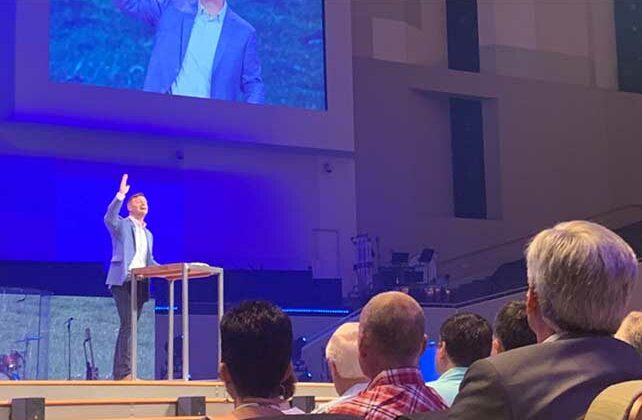 “Men will fail us. All earthly shepherds will disappoint us. But the cross of Christ and the empty grave are our permanent, everlasting reminders that there is nothing … that Christ, our shepherd, cannot do. If He can restore our souls and lead us unto paths of righteousness, He can do anything,” said Morton in the message that is part of a series on Psalm 23.

Last fall, several Executive Committee meetings revolved largely around the topic of waiving attorney-client privilege in the Guidepost Solutions investigation. Morton was among those who voted to waive privilege each time and joined a group of trustees grieved after the initial EC meeting that did not move forward to include that step, expressing he was “personally disappointed and heartsick” over the matter.

RELATED: ‘It Was Not Abuse Nor Was It Assault’: Johnny Hunt Responds To Guidepost Report, Admits To Improper Consensual Encounter

Learning of the allegations against his predecessor and mentor brought another kind of heartsick, he told a nearly full sanctuary May 29.

“It’s deeply personal for us because of a man we have known and loved and followed for years,” Morton said. The report’s allegations can lead those who admire Hunt to being “physically sick, angry, disturbed and confused.”

Morton cited Hunt’s May 22 Twitter statement and letters released May 27 that confessed to sexual sin while denying sexual assault.

“Here’s what we know as the people of First Baptist Woodstock,” Morton said. “God in Heaven has perfect knowledge of the entire situation. God is holy and He alone – God – is capable of being the perfect judge, the gracious healer, the able defender of all parties associated with these events.”

Morton urged prayer for all parties involved and said a group from the church will work to maintain “friendship” and “fellowship” with Hunt. He said a process for healing and restoration was already in progress and that Hunt had indicated his agreement to it. But, Morton added, “we must take the lead on this.”

Talking with Baptist Press today, Morton said the response to Sunday’s message has been “overwhelmingly supportive.”

According to the 2021 Annual Church Profile, First Baptist has just under 28,000 members. A church that size will include opinions on either side of any decision and that pattern has held here. However, Sunday’s crowd was very much in support of Morton with several amens punctuating his message.

Morton – who eschews social media – said his focus has been on listening to his church members rather than gauging the larger Southern Baptist discussion on sexual abuse. Those conversations led him to waiving privilege in his vote last year.

“If I were arguing from a strict standpoint of legal advice, I would have voted no,” he said. “However, I voted the way I did for two reasons.

“First, it was the clear will of the messengers. Second, I was hearing directly from abuse victims and survivors. There was no way in my heart I could ignore their opportunity for their story to be heard.”

The current discussion over sexual abuse cannot be swept away, he said Sunday.

“Southern Baptists, despite the wonderful work we’re doing all around the world for the cause of Christ, are most generally our own worst enemy. One incident of abuse in any place or in any church is a tragedy and it cannot be ignored,” he said.

The messengers at the Nashville SBC annual meeting asked for an investigation in the wake of the #MeToo and #ChurchToo discussions, Morton added. “It was not forced upon us. It was insisted by us, the 15,000 messengers who voted to do it. Southern Baptists were proactively trying to get our house in order based on public rumblings across the denomination.”

“What’s done in the light is done right,” Morton said, pointing back to an Oct. 3 sermon where he called for “men in powerful positions of authority to go to every length imaginable to honor and protect women and children.”

Attempts to cloud the roots of the investigation are also unhelpful, he said.

“This was not a witch hunt or a group of liberals trying to take down the Convention,” said Morton, calling those making those assertions “misinformed.”

“No one, anywhere, can honestly say with integrity [that] Southern Baptists are woke liberals. This is nonsense,” he said.

First Baptist is engaged in determining best practices and procedures regarding sexual abuse that will include input from “wise, godly, female voices directly speaking into this process.”

The church held one worship service May 29 instead of two as normal. It concluded with a time of prayer at the altar led by Morton.