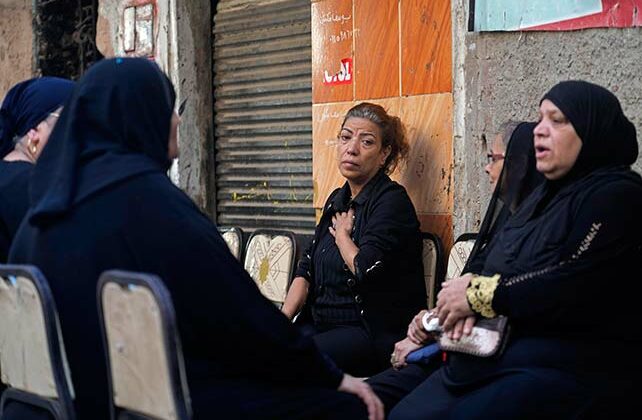 IMBABA, Egypt (AP) — For Mariam Habeib, the grief seems never ending: She lost her older sister, two nieces and a niece’s three young children in an intense fire that engulfed a church in Egypt’s capital during a recent service and killed 41 people.

The Coptic Christian community is one of the world’s oldest, and no stranger to sadness. A minority in Egypt, Coptic Orthodox Christians have faced deadly attacks by Islamic extremists, restrictions on church building and outbursts of sectarian-motivated violence in recent decades. The most recent tragedy brought a flood of sympathy from around the country.

“Our solace is that they went to heaven together as they liked to be together in life,” Habeib said of her relatives, tears streaming down her face.

Nineteen of those killed in the Aug. 14 fire were children. The blaze erupted at the Martyr Abu Sefein Coptic Christian Orthodox Church in the neighborhood of Imbaba, one of Egypt’s most densely populated areas. Sixteen people were also injured, including four police officers and residents involved in the rescue effort. Health authorities said the casualties were a result of smoke inhalation and a stampede as people tried to escape.

RELATED: Priest Dies From Stabbing on Seaside Promenade in Egypt

According to prosecutors, the fire was ignited by a short-circuit in the building’s generator, a backup source of power, which the church used during regular outages. The generator, they said, caught fire when the current returned after a blackout that morning.

Habeib lives in Shubra, another densely populated, working-class district in Cairo. On the morning of the fire, she said she was on her way to work when she received a phone call from her brother. He told her that he had heard there was a fire at Abu Sefein and that their oldest sister, Magda Habeib, and her daughters were there. She soon learned that victims were being brought to a nearby hospital.

By the time she arrived, Mariam Habeib found herself facing what she had dreaded during the half-hour drive to the hospital.

Her nephew, Mina Atif, had recognized the bodies of his mother, Magda, two sisters, Irine and Mirna, and Irine’s 5-year-old twin daughters, Barcina and Mariam. They roamed the halls looking for the still-missing 3-year-old boy. Then they saw hospital workers carrying a small body wrapped in a white sheet. It turned out to be the body of Irine’s toddler, Ibram.

“All of them were lying motionless before our eyes,” she said. “The kids had been very lively ones, as if they knew that their end would be soon.”

Habeib and her nephew collapsed in disbelief, two among the dozens of weeping grief-stricken relatives at the hospital’s morgue.

Although officials ruled out arson, the fire — one of the deadliest in Egypt in many years — raised a barrage of questions about the emergency response system, fire safety codes and restrictions on building houses of worship for one of the Middle East’s largest Christian communities.

The Martyr Abu Sefein Church was in a 120 square-meter (1,290 square-foot) space in a four-story converted apartment building that looks like other residential buildings in the crowded neighborhood constructed largely without planning or permits. It was recognizable as a church only by a sign above its front door, and an iron cross on its roof.

Coptic Christian Pope Tawadros II said the church, like many others, is too small for the number of congregants it serves. He blamed government restrictions on new church construction and urged authorities in Muslim-majority Egypt to move existing small churches to new locations or allow them to expand to accommodate growing numbers.

The limits on new church construction have led many congregations to convert residential buildings into places of worship. In 2016, President Abdel Fattah el-Sissi’s government issued the country’s first law spelling out the rules for building a church. Critics argued the law did nothing to ease previous restrictions.

Just a day before the fire, on Saturday, the entire family had been together for their weekly family gathering, steps away from the church.

“It was a very beautiful day, as if they were saying goodbye,” said Michael Ayad, who is married to Nermin, one of Magda’s two surviving children. Also present was the fiancé of Magda’s youngest daughter, Mirna, 22, a university student. The two were meant to have been married this year.

Days later, Mina, Magda’s son, was receiving hundreds of mourners at the same home where his family had been happy days before. Dozens of neighbors and relatives came to remember the dead, many speaking through tears.

A neighbor of 40 years who identified herself as Um Azza, recalled how Magda Habeib was among the first to try to settle disputes between neighbors no matter their religion, even marital problems.

“Everyone in the street is in debt to her for her generosity,” she said, fighting back tears.

Magda’s husband had died a decade ago, but the 61-year-old continued to live in the same apartment the family had inhabited for 30 years. Her two younger children Mina and Mirna, lived with her. Her two married daughters, Nermin and Irine, lived in the same neighborhood. Irine’s husband had died last year of a heart attack, leaving her a single mother to three young children. Irine and her children stayed the night on Saturday, to go to church with her mother the next morning.

“Tante Magda used to say, Irine and the kids are my purpose for the rest of my life,” Ayad recalled, using the French equivalent of aunt. “They went to Abu Sefein to die together.”