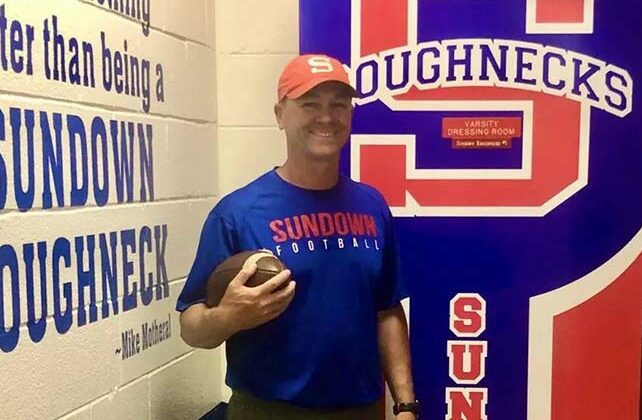 SUNDOWN, Texas (BP) – Brannon Rodgers knows well how bright the lights burn over football fields in the Texas panhandle. They shine on teenagers barely old enough to drive as the main players on a stage, a stage that even in the smallest of towns, on Friday nights feels like the center of the world.

Rodgers experienced it as a quarterback and safety for the Petersburg High Buffaloes, where his dad, Steve, was defensive coordinator. Now a veteran coach himself, Rodgers has only recently begun to fully appreciate another aspect of the game he loves.

Coaches do more than coach. They are role models and parental figures. In motivating young athletes, a coach can’t turn off where he or she gets their sense of right and wrong, honor and thankfulness. The motivation to press on not only points toward the end zone, but a goal of eternal value.

RELATED: Supreme Court Sides With Coach Who Sought to Pray After Game

Those truths are why he paid close attention to the recent Supreme Court decision of Kennedy v. Bremerton School District.

By a 6-3 margin, justices said that the school district violated the First Amendment rights of Joseph Kennedy, a football coach in Washington state, by removing him from his position after he refused to stop praying at midfield following games. Kennedy began the practice on his own as a way of expressing thanks to God for the opportunity to coach, but eventually athletes chose to join him.

“The case caught my attention from the beginning,” said Rodgers, who recently took the head coaching position at Sundown High School after five seasons at Jacksboro High, 52 miles northwest of Fort Worth.

Rodgers is a south plains guy with roots throughout the Lubbock area. Before going to Jacksboro, he coached for 11 seasons in Crosbyton, 35 miles southeast of Petersburg. A drive between them takes you through Floydada, his wife Misty’s hometown.

His head coach as a player, Joe Robertson, walked the sidelines with Steve Rodgers at Petersburg for well over 20 years. Their own Christian walk knew no boundary, however.

“They lived their lives in the field house, on the football field and in the community the same way,” Rodgers told Baptist Press. “They didn’t take off their Christian mask and put on their coaching hat. They led by example. We prayed before, after and during games. It was part of our fabric.”

Around Gadsden, Ala., the coaching influence of Charles and Kim Nails has spread across generations. Now at Southside High, they spent the majority of their careers with Gadsden High School – he as defensive coordinator for the football team and she as girls basketball coach. In between, Kim spent seven years as women’s basketball coach at Gadsden State Community College. Her husband has always been a common presence as an unofficial assistant on the bench.

Charles was lured out of coaching retirement at Southside in 2011 to help with the Panthers’ program. He and Kim both stepped down from football and basketball after the recent season, though Kim will continue coaching cross country.

Both know coaching success. Charles was on the sidelines when GHS brought home two state titles. Kim’s teams averaged more than 20 wins a season while claiming four region championships and five state tournament appearances. Twice at Gadsden State, the Cardinals claimed their conference title and bid to the national tournament.

True success had little to do with the scoreboard, though. It took Charles a little longer to learn that.

A change in perspective

“The Lord had to open the door for me to get back into coaching football,” he said. “When He did, I made it clear to everyone that I was a different coach than before. Every boy who played for us would know about the Gospel.

“It’s been an awesome experience. I’m the Fellowship of Christian Athletes huddle leader at the school now. It’s all really changed me and not something you have to ‘try’ to do once you’re tuned in to the Lord with your platform.”

Kim saw the basketball court as not only a place to teach drills, but develop life lessons.

“It became a mission field for me to help them grow spiritually and direct them to Christ. At Gadsden State, many of those players were away from home for the first time. We shared a lot of meals with them and things like that,” she said.

Any coach worth their whistle knows the inevitability of becoming involved with a player’s personal life to some degree. Relationships with family or a girlfriend, grades, what’s next after sports – all of those come up just as much as who gets the ball when facing a zone defense.

“If I only gave them basketball, I failed them,” Kim Nails said.

“The case gets back to something the Court said many years ago,” Leatherwood said. “A teacher or student does not shed their First Amendment rights simply because they enter the school house door.”

Kennedy’s actions on his own were not communicating a policy position on the part of the school, Leatherwood said, but the importance of faith in his life.

“It reaffirms the fact that you can be a teacher or a student and be a Christian in the public square, and that’s a good thing. … It’s a very good decision, one that I think Southern Baptists should be very happy with.”

The Nailses were “mildly surprised” at the SCOTUS decision.

“We’re ecstatic anytime there’s a law that’s in line with Christ and his teachings,” Charles said. Both are longtime members of MeadowBrook Church in Rainbow City, Ala., where Charles is a deacon and volunteers in the middle school ministry. Kim teaches a fifth grade Life Group on Sundays.

Knocks on the door

“These kids come from families that make their living from the oil fields,” Rodgers said. “They’re some of the hardest working people I’ve been around. They roll up their sleeves and go to work every day to provide for their families. The kids are great and take a lot of pride in their school work. I’m proud to be a part of it.”

A coach now for 24 years, he’s come to realize the lifelong impact the title carries.

It wasn’t unusual for a former player to knock on the front door of the family home and spend hours talking to Steve Rodgers. As is the case in many small towns, a lot of folks stay and paths cross at the hardware store, church and annual Fourth of July fireworks show. Young men grow from running backs into fathers and husbands, still with questions about the right direction to take.

“I’m having those same kinds of interactions now,” said the younger Rodgers. “I see them at weddings and their jobs. We’re building a house and the guys doing the electrical and HVAC work are some of my former players from Crosbyton.”

“He’s a quality guy who loves the Lord and applies his faith to his family, community and work,” Griffin said.

Rodgers credits the fellowship and support he gets from FCA and Coaches Outreach, whose discipleship materials he uses for his personal Bible study. Such organizations help him remain focused on his role as a coach and Gospel witness.

For example, the Sundown field house will soon have a board promoting a pyramid of success, modeled after the one made famous by UCLA coaching legend John Wooden. Philippians 4:13 will be at the top.

“We want to win state titles, but the ultimate goal is to press on toward the prize in Christ Jesus,” Rodgers said. “We don’t preach and give sermons, but point players in the right direction.”

And if the Supreme Court’s decision had gone the other way?

“I wouldn’t change a lick. That coach wasn’t going to, either,” he said. “You can’t separate Christ from who you are. We’ll continue to do what we’ve been doing.

“We’re not infringing on anybody, but just living our life and trying to influence and mold young people. If they see something they know is the truth they’re going to follow it. You can’t fake your way through that.”