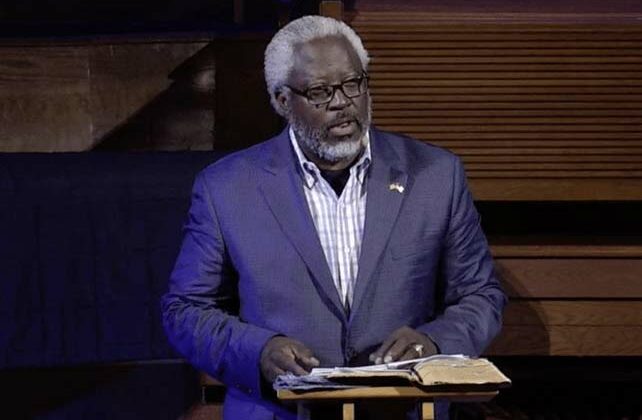 WASHINGTON (BP) – As America observed National Day of Prayer May 5, Southern Baptist Convention Executive Committee Chairman Rolland Slade exalted church and community leaders in San Diego at one of tens of thousands of local prayer events across the U.S.

“In my keynote address, I encouraged believers to ‘Exalt the Lord’ wherever they were, because He established them there,” Slade, Pastor of Meridian Baptist Church in El Cajon, Calif., told Baptist Press. “That includes not only praying for the seven pillars, (but also) for the believers within those sectors to step forward, letting their faith be known.”

San Diego Downtown Fellowship of Churches and Ministries sponsored the event at First Presbyterian Church, with church leaders and government leaders praying for the nation.

It was one of tens of thousands of prayer meetings held at churches, businesses and government centers in advance of the National Day of Prayer broadcast at 8 p.m. Eastern from the Museum of the Bible in Washington.

Many Southern Baptists participated in the national event.

“It is through prayer that we offer our praise,” Prestonwood Baptist Church Senior Pastor Jack Graham of Dallas said in advance of his prayer. “There’s no substitute to praying in the power of God’s Spirit in the name of the Lord Jesus to our great God.”

“Revival takes place … in times of desperation,” Young said. “Everywhere you turn on the globe, I see and feel desperation, and that’s what happens when God begins to do a work in the lives of people, individuals, in churches, and therefore a moment of desperation. Then we pray that God begins, I pray, to bring many people to Jesus Christ, and to begin to heal our land and our world.”

AnGel Ministries Founder Anne Graham Lotz, daughter of the late evangelist Billy Graham, compared prayer to the vital act of breathing in sharing what prayer means to her.

Music artists Chris Tomlin, Lecrae and Matthew West were among the many participants in the multidenominational Christian event featuring many speakers and pastors.

RELATED: Matthew West to Critics of ‘Modest Is Hottest’ Video: ‘The Song Was Created as Satire’

Branzell prayed for Christians in Ukraine and Russia.

“Exalt the Lord who has established us,” was the event theme, based on Colossians 2:6-7.

National Day of Pray is a government-recognized observance held annually on the first Thursday in May.