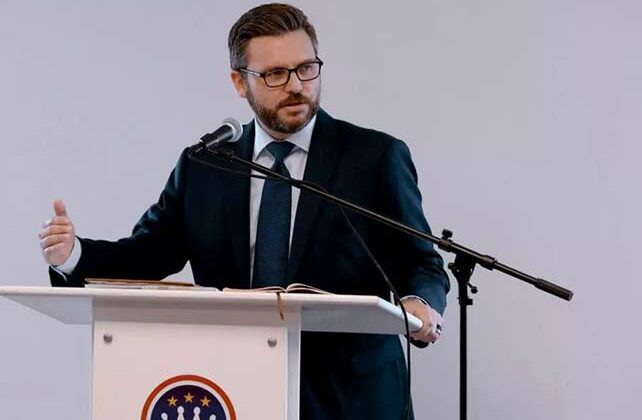 NASHVILLE (BP) – The Baptist witness the Ethics & Religious Liberty Commission has long provided in the public square “is needed now as much as ever,” Brent Leatherwood said Wednesday (Sept. 14) in his first presidential report to the entity’s trustees.

A day after the trustees elected him unanimously as the Southern Baptist entity’s ninth president, Leatherwood expressed his gratitude to the ERLC’s board, reported on the commission’s work during the previous year in which he served as acting president and offered a view of its continuing commitments.

In their two-day meeting, trustees also voted to require background checks for their members, adopted a budget and heard developments on the commission’s role in helping Southern Baptists prevent and respond to sexual abuse.

The ERLC board voted without opposition to require criminal and sex registry background checks of all current and future trustees. The board-approved motion called for the checks to be conducted each time trustees are elected by convention messengers “until/unless the [SBC] incorporates a background check into their Nominating Committee process.”

The trustees’ election of Leatherwood, 41, filled the ERLC’s permanent leadership role for the first time since the departure of Russell Moore as president more than 15 months earlier. The board had named Leatherwood as acting president at its September 2021 meeting.

Leatherwood, 41, thanked the trustees from across the country for “placing your confidence in me to lead this historic commission that has in various forms over a century brought forth a conventional Baptist witness into the public square.”

Southern Baptists expect us “to go into the public square and proclaim things that we know from The Baptist Faith and Message,” Leatherwood said before citing some of the tenets of the SBC’s statement of faith.

“God alone is Lord of the conscience. We’re going to continue to say that,” he said. “Marriage is between one man and one woman in a covenant union for life, that religious liberty is our nation’s essential liberty, that human dignity matters and that human life matters at all stages from conception to natural death.

Leatherwood will need to fill several staff positions, including on the senior leadership team, that have become vacant in the last 15 months. He read from Exodus 31:1-11, which describes God’s selection and preparation of men to design and build the elements of the tabernacle.

“God has already put wisdom in the hearts and minds of the future team members that are going to join the current team that is here at the ERLC, so that we may continue carrying out the work that is part of our ministry assignment that Southern Baptists have given us and we are privileged to carry out,” Leatherwood told the trustees.

It is his desire the staff members he adds “have the ability to communicate to our pastors and to communicate in a way that Southern Baptists in the pews can completely understand,” Leatherwood said. He told the trustees he will bring candidates for senior leadership roles to the board for approval.

As part of his report, Leatherwood read the names of those who have served on the ERLC staff during the year he was acting president.

He commented on some of the most recent Supreme Court term’s cases in which the ERLC signed onto friend-of-the-court briefs. The justices’ June overturning of the 1973 Roe v. Wade decision that legalized abortion nationwide “is without a doubt the most significant pro-life court decision in the history of the pro-life movement,” he said of the Dobbs v. Jackson Women’s Health Organization opinion.

Roe’s reversal “certainly shifts the conversation about pro-life policy from being almost entirely in the domain” of the federal level to work at the state level, Leatherwood told trustees. Regarding pro-life policies, some states are “taking steps backward from our perspective, significantly backward,” he said.

“We have churches in those states, and we need to be able to work with those brothers and sisters and make sure we are still advancing a witness,” Leatherwood said. “[T]hat is why I think it is absolutely critical that we lean into partnerships with our state conventions. We’ve started that work.”

Leatherwood told trustees that major supporters of a collective of pro-life organizations in which the ERLC has been and remains an important leader have decided it is time for the coalition to become an independent entity. The idea of a collective that was “hatched initially at the ERLC” could therefore move “to a place where it can stand alone and be self-sufficient,” though the change is not imminent, he said. Leaders of the coalition have Elizabeth Graham, the ERLC’s vice president of operations and life initiatives, in mind to lead the new organization, he said.

“Now don’t think for a minute that we are stepping back from the pro-life space,” Leatherwood told the board. “No, we are going to continue being the leading voice in evangelical life when it comes to protecting life and making sure that public policies are pushed forward. Instead, this is, I think, an important development as we further extend our influence in the pro-life space.”

The ERLC will continue to oppose the Equality Act, a sweeping gay and transgender rights bill, and proposed rules from the Biden administration to expand civil rights protections on the basis of “sexual orientation” and “gender identity,” he said.

Regarding the trustees’ approval of background checks for themselves, Leatherwood told Baptist Press, “Upon completion of these checks, we will inform the ERLC’s executive committee of the results. I appreciate our board taking this action, as I believe it shows their commitment to not only leading on the issue of abuse prevention but modeling an additional way a board can combat sexual abuse.”

For the ERLC hiring process, staff and interns must complete criminal and sex registry background checks.

The trustees received a response to a motion adopted by the board in February that instructed the ERLC’s Executive Committee “to explore the feasibility” of expanding the commission’s ministry assignment to help establish what may be described as a database that would include “concerns about sexual abuse and sexual predation.”

Messengers to the SBC’s annual meeting in June of this year overwhelmingly approved two recommendations from the Sexual Abuse Task Force appointed the previous year, one that appeared to address the goal of the February ERLC motion. The messenger-endorsed recommendations were for the creation of a “Ministry Check” website to share “properly vetted information” and for the formation of an Abuse Reform Implementation Task Force (ARITF). The ARITF, which met for the first time earlier this month, is to oversee an independent contractor’s establishment of the “Ministry Check” website.

In a response to the February motion read to trustees by the board’s chair, Lori Bova of New Mexico, the Executive Committee said, “In light of the actions of the messengers of the 2022 SBC annual meeting, the spirit of this motion has been affirmatively answered by the convention. The ERLC supports this action and will respectfully defer to the will of the messengers. At the same time, the ERLC will continue to prioritize equipping churches on the issue of sexual abuse and will now do so alongside the newly created ARITF. The task force has been given an assignment consistent with this motion, and therefore no further action is required at this time.”

In response to a motion at the 2021 SBC meeting, the trustees voted last September to commit the ERLC to an assessment of sexual abuse in the convention and approved $250,000 as an initial investment in that effort.

A motion by Jonathan Whitehead, an at-large trustee, to reopen the bidding process to conduct the assessment failed. In February, the board had approved Guidepost Solutions to perform the assessment. Guidepost conducted a third-party review of the SBC Executive Committee’s handling of sexual abuse issues. Guidepost’s Twitter post in support of gay and transgender rights in June elicited grave concern from many Southern Baptists.

Leatherwood encouraged trustees to wait until ARITF completes the priority on its agenda – the creation of a database – and begins partnering with the ERLC in the assessment before reopening the bidding process.

In other actions, the ERLC trustees:

It was announced recommendations for the annual John Leland Religious Liberty Award and Richard Land Distinguished Service Award would be made at the next trustee meeting in early 2023.