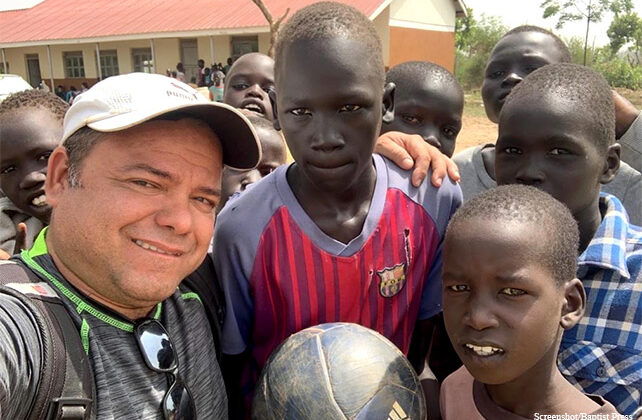 While political unrest persists in Cuba, Global Missionary Partner Hector Cabrera, a Cuban, is in Uganda, serving Sudanese refugees with the love of Christ and his God-given talents.

Earlier this summer, Cabrera was sent to partner with IMB missionary Jeremy Taliaferro, whose team serves refugees, most of whom are from South Sudan. Some are from North Sudan, and a handful are from the Democratic Republic of Congo. The majority are animists, who follow traditional African religions. These false religions are also mixed with elements of Christianity. Some of the refugees are Muslim.

Taliaferro’s team partners with Christians within the Sudanese refugee population to strengthen the church. They focus on trauma healing, evangelism, discipleship and church planting. They also work on water wells, build houses for those who are disabled and deliver food to children in schools.

Cabrera’s heart for youth ministry, which began in Cuba, was stirred by the children in the refugee camp.

“I decided to teach them Bible stories using sport,” he said. “… If they need me to repair wells and houses, I do it. But my favorite thing is to play sports with the kids.”

Taliaferro said Cabrera, who plans to live in Uganda at least three years, has been helpful to the team in many ways, bringing diversity and experience. But his sports ministry has perhaps been the most valuable.

“There’s a lot of idle young men who are just standing around with nothing to do during the day.” Taliaferro said. “Hector being able to get out and get them involved in sports and share the Gospel is going to open up lots of doors.”

Cabrera’s time overseas hasn’t been easy, as unrest persists in his home country and COVID-19 remains a threat.

“Cuba is going through a lot of upheaval right now,” Taliaferro said. “I think oftentimes, we tend to think that because our GMPs are internationals, they’re fine when traveling away from home. But he has family back in Cuba.

“There are people who have been sick since he’s been here. He’s seen his country break out into rioting and protests throughout. I’ve seen it weigh heavy on him.

“He deals with the same challenges that we do when we’re here, knowing we’re in a different country and far from home. But knowing that he’s missing out on some things – some important things that are happening in his home country while he’s away serving the Lord – I think that is something that is new and fresh (for Cabrera), and something that we’ve been going through for the last couple months.”

Cabrera – who was sent by Montes des los Olives Baptist Church in Alamar, Cuba, through the sending agency Cuba to the Nations – rests in the knowledge that he’s fully supported by his church during his time overseas.

“Yes, it will be hard, but I’ve already seen God take care of my family, helping them, supplying their needs,” he said. “Our church supports me. Anything I need or my family needs, they are there, always.”

Taliaferro commended the way the Cuban church has supported their missionary, not only financially and through prayer but even in caring for Cabrera’s family in his absence as he helps get the Gospel to the nations.

“I think they’ve really gone above and beyond,” Taliaferro said. “I’m so grateful for the Cuban church and the sacrifices they’re making and how well they’re doing in sending their people. I think it’s been a great testimony to watch and to listen to.”