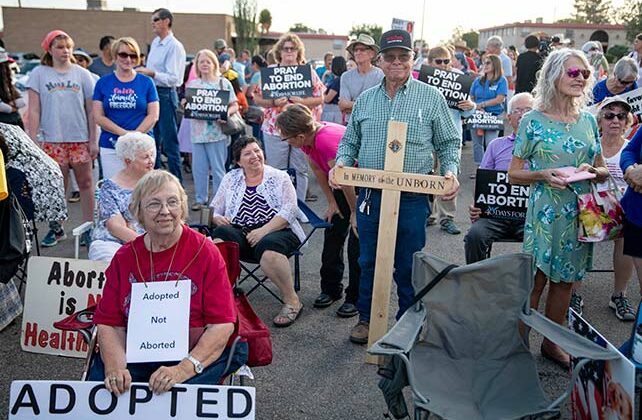 LAS CRUCES, N.M. (AP) — Anti-abortion activists from across the U.S. converged in southern New Mexico on Tuesday to protest relocation plans by the Mississippi clinic at the center of the court battle that overturned the Roe v. Wade decision that legalized abortion nationwide, but New Mexico’s governor vowed not to back down from her support for access to abortions.

Democrat Michelle Lujan Grisham, who is running for reelection, tweeted hours before the protest that access remains legal and safe in her state.

“New Mexicans understand the right to make personal decisions about one’s own reproductive health care — and we won’t go back,” she wrote.

The crowd gathered in triple-digit temperatures in the southern city of Las Cruces, near the location where Jackson Women’s Health Organization plans to open its new clinic next week.

Some held signs that read “Pray to End Abortion” and “Vote Your Values.” They heard from the leader of a local Catholic parish, a university student group and activists from Texas and Mississippi who talked about their experiences shutting down abortion clinics elsewhere.

Terri Herring, president of Mississippi-based group Choose Life, told the crowd about more than two dozen pregnancy centers in her state that have helped mothers who were considering abortion but opted to have their babies instead.

“We need to make this a refuge for women and their children,” she said of New Mexico, before organizers of the rally announced they would open a Guiding Star Project clinic next door to the planned abortion clinic. The facility will provide fertility care, pregnancy and childbirth support services as alternatives to the abortions planned for the former Mississippi clinic next door.

Leah Jacobson, founder and CEO of The Guiding Star Project, told the crowd that the root causes of what is driving women to abortion need to be addressed and that a culture shift is needed to counter what she described as a loss of “bodily autonomy through devices, pills, drugs and surgeries.”

“If we love life, if we want to protect women and children, we need to understand that there is something fundamentally broken about how we are treating motherhood in our culture,” she said, pointing to the lack of maternity leave or breastfeeding spaces, among other challenges. “How about we actually take the needs of women into consideration?”

New Mexico’s Democratic-controlled Legislature supports access, and state lawmakers last year repealed a dormant 1969 law that outlawed most abortion procedures as felonies, ensuring access to abortion even after the Supreme Court rolled back the national guarantee.

Preparations are well underway for the new abortion clinic, with furniture and equipment from Jackson Women’s Health Organization moved from Mississippi, and it is due to open soon.

RELATED: Violence Against Pregnancy Support Centers on the Rise

Derzis said Tuesday’s demonstration against the abortion clinic didn’t bother her since protests have gone for years at other clinics she has owned in Mississippi and elsewhere.