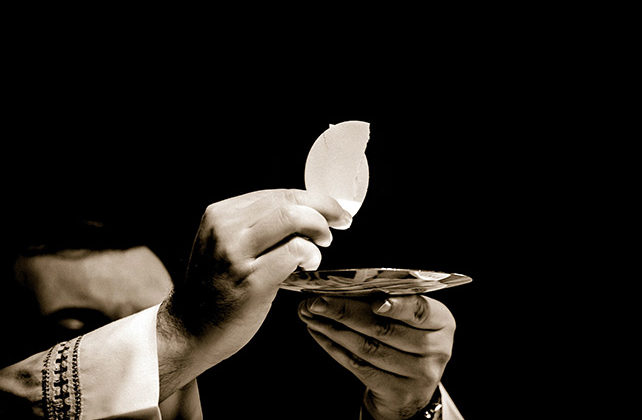 VATICAN CITY (RNS) As bishops in the United States prepare to discuss the drafting of a document that could ban pro-choice Catholic politicians like President Joe Biden from receiving Communion, experts say while this is not a new debate, the stakes are higher than ever.

In 2004, when Catholic Democratic politician John F. Kerry ran for president, some members of the U.S. bishops’ conference considered the possibility of barring him from receiving the Eucharist because of his support of pro-choice legislation.

The support for such a ban was not limited to U.S. bishops; indeed Cardinal Joseph Ratzinger — who would later become Pope Benedict XVI — was in support of banning Catholic politicians who “with obstinate persistence” support abortion legislation.

The head of the Vatican’s doctrine watchdog department at the time, Ratzinger wrote a letter to two prominent U.S. Catholic leaders laying out his case for the ban.

“When a person’s formal cooperation becomes manifest (understood, in the case of a Catholic politician, as his consistently campaigning and voting for permissive abortion and euthanasia laws),” his pastor must meet with him to instruct him on Catholic teaching on abortion and encourage him to refrain from receiving the sacrament, Ratzinger wrote in the letter, sent to the president of the bishops’ conference, Bishop Wilton Gregory, and to the head of the bishops’ “domestic policy division,” then-Cardinal Theodore McCarrick of Washington, D.C.

If the individual insists on presenting himself to receive Communion, Ratzinger continued, the priest must refuse. “This decision, properly speaking, is not a sanction or a penalty,” Ratzinger wrote, but due “to the person’s public unworthiness to receive Holy Communion due to an objective situation of sin.”

The U.S. bishops decided in the end to take a middle-of-the-road approach. During their general assembly in 2004, they chose to let the individual bishops decide whether or not to administer Communion to pro-choice Catholic politicians.

McCarrick was later stripped of his cardinal status and positions following reports of his sexual abuse of seminarians and a child. Gregory was made a cardinal by Pope Francis in 2020 and is the new Archbishop of Washington, D.C.

Seven years later, the second Catholic president of the United States — who frequently quotes Pope Francis in his public speeches and regularly attends Mass — is embroiled in the same debate, but while some of the main players remain, insiders say the context in the U.S. Catholic church and the Vatican has changed.

As bishops in the U.S. objected to pictures showing Biden receiving Communion and urged fellow bishops to support the drafting of a document to ban pro-choice politicians from receiving the sacrament, the Vatican sent a letter suggesting the episcopacy think long and hard about the possible repercussions this decision might have.

In a May 7 letter sent to the U.S. bishops, Cardinal Luis Ladaria, the head of the Vatican’s Congregation for the Doctrine of the Faith, urged that “dialogue among the bishops be undertaken to preserve the unity of the episcopal conference in the face of the disagreements over this controversial topic.”

While the 2004 letter sent by Ratzinger was private, Ladaria issued his letter publicly to Archbishop José Gomez, the current president of the U.S. bishops’ conference. This latest Vatican letter “is a much more public intervention by a high-ranking figure of the Holy See, than the previous letter,” said the Rev. John P. Beal, Stephan Kuttner Distinguished Professor of Canon Law at the Catholic University of America, in an interview with Religion News Service.

Beal said the letter from Ladaria hints that the Vatican isn’t keen on the proposals made by some bishops in the United States, noting Ladaria referenced the 1998 apostolic letter by Saint Pope John Paul II, which states that if the bishops’ conference doesn’t reach a unanimous decision, then a two-thirds majority is needed for their proposal to be vetted by the Holy See.

“And I get the impression from the letter that they shouldn’t count on that being an automatic recognition,” he added.

When Kerry lost his bid for the presidency, media attention to the question of the Communion ban dwindled and lost relevance, but, according to Beal, “it never actually disappeared.” Today, with Biden’s very public faith on display, Beal said that “the issue hasn’t changed much; it’s just the profile has changed.”

It’s difficult to find many historical precedents for the discussions taking place among U.S. bishops. In the past, the pope has relied on excommunications to ban high-profile Catholics from receiving the Eucharist, for theological — and at times, political — offenses.

In his letter, Ratzinger quoted the document issued by the Vatican Department for Legislative Texts in 2000, which barred Catholics who are divorced and civilly remarried from receiving the Eucharist. Proponents of the Communion ban have appealed to Canon 915 of Canon Law, which states individuals “obstinately persevering in manifest grave sin are not to be admitted to Holy Communion.”

Beal explained the canon in question expands on the previous Code of Canon Law of 1917, which recommended people who publicly live in conflict with Catholic beliefs be barred from receiving the sacrament, though the document listed prostitutes and fortune tellers as examples.

Pope Francis, in his 2016 Apostolic exhortation, Amoris Laetitia (the Joy of the Gospel), cautiously opened the door for divorced and remarried Catholics to receive the Eucharist with the accompaniment and guidance of their pastor. Only for mafiosi, meaning members of organized crime, has the pontiff suggested a Communion ban and even excommunication.

“The issue of abortion is not unique to the United States,” Beal said. “It’s been an issue even in traditionally Catholic countries like Italy and Ireland,” he added, where bishops haven’t opted for punitive measures. Ladaria urged U.S. bishops in his letter to dialogue with other episcopal conferences in an effort to display unity and find a common approach.

According to Bishop Michael John Sheridan, of the diocese of Colorado Springs, who was among the bishops advocating a Communion ban in 2004, a position he still holds today, the question raised when Kerry ran for president is the same as the one faced by bishops today.

“I think in some ways, it’s maybe even more critical now, when we have, really, two very high-profile Catholics in government,” he said, referring to both Biden and Speaker of the House Nancy Pelosi, in an interview with RNS, adding that, given recent legislative and social developments, “it’s more acute and it’s more public and it’s more radical now than ever.”