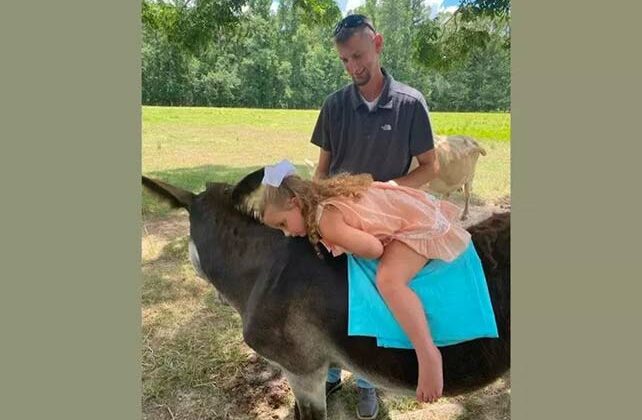 KELLY, La. (BP) – J Bear is old and can get stuck in his ways, stubborn even. At any moment he makes a racket for no other reason than to let others know he’s there. Small in stature, a first impression may leave you wondering what kind of good he can accomplish.

Evelyn Pardue has known these things for at least 18 years, the length of time J Bear has lived alongside her other donkey, Jack, and cows and on the same 40 acres where she was born 82 years ago. But Pardue knows something else about J Bear .

He can work with kids like no other animal she’s ever encountered.

That’s what led Pardue to invite Dustin and Brittany Emfinger, all members at Kelly Baptist Church, to her property on July 24. Perhaps it was time for the couple’s three-year-old autistic daughter, Dezi, to meet J Bear.

Dezi isn’t much for animals, only recently being on friendly terms with the family’s dog. At Pardue’s insistence, though, a blanket was put on J Bear’s back for Dezi to take a seat.

“She would look at animals, even little ones, from a distance but that would be it,” said Brittany. “But when she got on his back, she just sat there. That donkey was amazing. It’s like he just sensed something and got completely still.”

“It was … I don’t know. When she laid down it made me so happy to see her doing something you typically see other kids do,” said her mother.

The scene could ring true for how members of Kelly Baptist, which averages 60 in Sunday attendance, look out for each other.

Pardue’s story includes much heartbreak. In her lifetime, cancer has claimed two husbands and all four of her children. It tried to claim her, too, in 2018.

Her second husband, Bob Pardue, got her to attend Kelly Baptist Church. At 73 years old she prayed for Christ to be her Savior and has since assumed the role of the church matriarch.

“She’s just a pioneer woman who has worked hard all her life,” said Pastor Joe Aguillard. “I was blessed to baptize her a few years ago.”

At her age with cows, donkeys and two bulls she keeps in separate pastures, Pardue still finds time to help others. Time was spent this week clothes-shopping for a family who lost their home in a fire.

Kelly Baptist has become a spiritual home and extended family for the Emfingers, too. As a couple, battles with addiction had pushed their marriage to the brink and cost them almost everything. One day a friend of Brittany’s invited her to church. Dustin eventually joined her as did their four children.

The support they’ve received has been crucial. Their youngest daughter was technically nonverbal, but that didn’t mean she was quiet nor inactive. As a baby and toddler, she cried often. It wasn’t unusual for her to wake at 1 a.m. and not go back to sleep until six. Brittany, a former nurse, stayed home with her during the day while Dustin put in his long hours as a contractor.

“It could be miserable at times,” said Brittany, on the mounting exhaustion.

Sunday worship was “a toss-up,” with Brittany spending many of them sitting in the church’s nursery with Dezi, watching the service through Facebook. Judy Aguillard, the pastor’s wife, soon put a stop to that.

“Sister Judy, she’s pretty much taken over the nursery,” said Brittany. “She’s become very familiar with Dezi and for the last six months or so, I haven’t had to go back there. I just got saved in the last five years and Judy knows how eager I am to be [in the sanctuary].”

It’s also a blessing for a lack of attention to be received. Say, for instance, a three-year-old decides to mess with your shoes under the table during a churchwide fish fry. Let it go.

“People have grown to accept her little autistic behaviors and nobody minds,” said Brittany. “Kelly is just the most perfect little church.”

Pardue has experienced that connection as well. One church member, Thomas Pollard, unofficially adopted her as another grandparent. Every time Pardue went grocery shopping at Mac’s Fresh Market in nearby Olla, where he worked, Pollard would welcome her.

“He was such a nice young man and showed he cared,” said Pardue of the young man who graduated from Caldwell Parrish High in 2021. Now a Marine, he sent her a video this year wishing her a Happy Mother’s Day.

“It made my day and shows that at Kelly Baptist everybody loves everybody,” she said. “If it wasn’t for my church family, I’d have already lost it.”

In 2019, Pastor Aguillard, wrote the annual Christmas play. Titled “And I Remember Kelly,” it starred Pardue and was set at Mac’s. In the setting she meets church members one by one.

“It was heartwarming and memorable … and it was real,” said Aguillard.

Since joining Kelly Baptist, the Emfingers and three of their children have been baptized. Dustin leads the church’s ministry toward widows and orphans. That day his family visited Pardue, he had been talking to her about adding some gravel from a church paving project to a boggy stretch of her land.

It ended with a scene that melted his heart – a daddy watching his little girl make a connection.

“I can hardly describe it,” he said. “It was leaps and bounds and pride and joy and happiness.”

RELATED: Hitting a Church Growth Barrier? Getting Bigger Isn’t Your Only Option

The family has since learned that, yes, apparently donkeys have a connection with kids with autism. Just as children like Dezi are highly tuned to sensory perception, so is J Bear.

The same can happen in a small church, said Aguillard.

“We want to give God the glory. We’re just country people and are not doing this like a textbook. It’s just people relating to each other and doing that through Jesus,” he said.

Looks can be deceiving and potential misjudged. Many churches, for instance, are small and can be disregarded on their ability to make an impact. But it’s hard to overestimate the good they can accomplish.