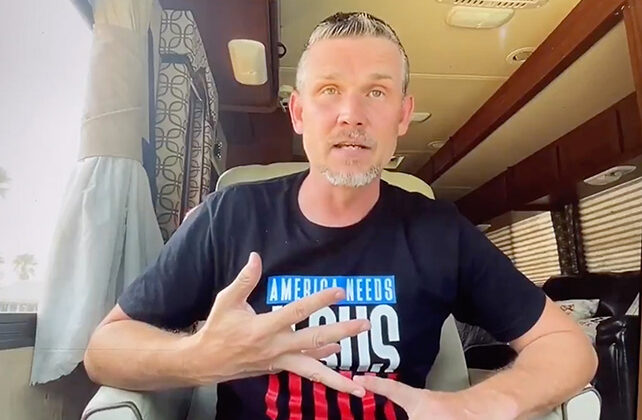 “If you’re tired of the perpetual masking, medical privacy invasions, indoctrination in schools, or election integrity being compromised here is your opportunity to stand and be counted,” reads the website promoting the tour, which was organized by Tennessee Stands, a conservative activist group that opposes COVID-19 restrictions and mask mandates.

But after Lisa Herod, a Union graduate, organized a petition against the event, Union President Samuel W. “Dub” Oliver announced on Thursday (Aug. 12) that the contract to host the event was canceled.

Oliver said that Freedom Matters organizers approached the school about renting space and that “this was never an event sponsored or sanctioned by the University.”

“We appreciate the input we have received about this matter, and we’re grateful for a community that cares deeply about Union, its mission, and its values,” he wrote.

Much of the controversy over the event centers on Locke, pastor of Global Vision Bible Church in Mount Juliet, Tennessee, who is known for his pro-Trump, anti-mask pulpit pronouncements.

In a recent sermon, Locke warned that anyone who showed up at a church service wearing a mask would be thrown out. A sign on the church property reads, “This is a mask-free campus. Kindly remove them or stay in your car. We celebrate faith over fear.”

Global Vision has held services in an outdoor tent during most of the COVID-19 pandemic, and Locke has labeled pastors who shut down in-person services as cowards. He also accused Tennessee Governor Bill Lee, who is a conservative Christian, of building “quarantine camps” for unvaccinated people.

At the recent America’s Revival meeting in Dallas, Locke said his church would use armed force to resist any attempts to restrict his church’s services.

Herod’s petition to cancel the event focused not on the tour’s constitutional rights but the message itself. “The beliefs espoused by Freedom Matters neither represent scientific fact or biblical truth, and the fact that they will be shared from a pulpit is not only shameful, but negligent and reprehensible,” the petition states.

Christian author and speaker Shane Claiborne plans to attend Locke’s church while wearing a mask this weekend — and invited his social media followers to join him.

Clairborne, who is in Tennessee promoting his “Guns to Garden Tools” project, said that he reached out to Locke by email and telephone, hoping to pray with the Global Vision pastor on Sunday.

While he will wear a mask to worship, Claiborne said he does not want to disrupt the church and will leave quietly if asked to. If that happens, he said, “we’ll have a worship service of our own.” He’s concerned about some of the public statements that Locke has made and hopes he and Locke will be able to talk through some of their differences.

Claiborne pointed to a passage in the 18th chapter of the New Testament Gospel of Matthew, which urges followers of Jesus to work out their differences face to face.

“I’m one that believes in Matthew 18 — you know, talking with each other, not just like throwing stones on Twitter,” he said.

Lindsay, an atheist activist best known for writing a series of hoax papers about “grievance studies,” has taken an active role in evangelical debates over critical race theory. His work has helped fuel anti-CRT debates among Southern Baptists. Lindsay has also criticized those “bulls–t people from behind a Bible.”

Tennessee Stands did not respond to a request for comment.