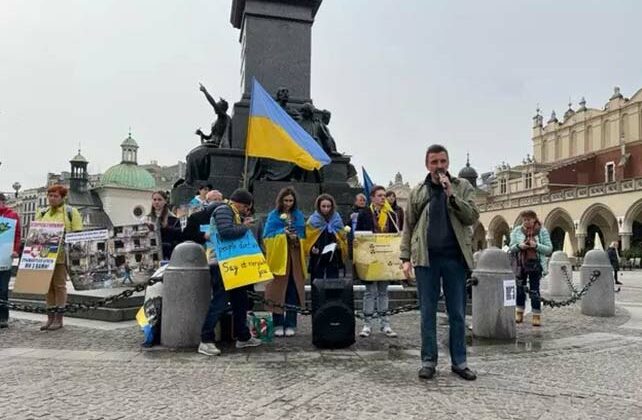 MEDYKA, Poland (BP) – Ever since the beginning of Russia’s war on Ukraine, Christian author Kyle Duncan knew he had to do something.

The terrible things Ukrainians have endured are deeply personal to Duncan, as his 21-year-old son was adopted from the country.

After much contemplation, Duncan’s plan materialized – he would journey to the Ukrainian border to hear and document stories from survivors of the conflict. Those stories have been compiled into a book – “Hope For Ukraine,” which releases Tuesday, Sept. 6.

“I just felt helpless and was thinking what I could do for my son and for the situation,” Duncan told Baptist Press.

“God just put it on my heart to write a book of stories, and rather than it be my opinion or views, that I would use my storytelling skills to have people from Ukraine tell their story.”

RELATED: ‘About 400’ Baptist Churches Lost in Russia’s War on Ukraine

In Duncan’s more than 30-year career as an editor and author, he’s helped people tell their stories, both individuals like artist TobyMac and author Gary Chapman as well as organizations like Voice of the Martyrs.

He wanted to take that writing experience and use it to chronicle people’s experiences during the conflict in Ukraine, which had been important to him even before it officially began.

For Duncan, the personal connection to Ukraine started many years ago with the adoption of his son Jhenya in 2007.

He and his wife have three biological daughters and a son who died a few days after he was born. Starting in early 2007, Duncan said his wife felt God telling her that they should adopt a young boy.

“I eventually realized this was not a suggestion, but an assignment from God, and we needed to be obedient,” Duncan said.

Jhenya was adopted into their family in the summer or 2007 when he was 6 years old.

As Jhenya grew, Duncan said the family would consistently keep up with the news regarding the relationship between Russia and Ukraine, culminating in Russia’s full-scale invasion of the country this February.

Duncan said Jhenya had a very intense response to the invasion, even wanting to jump on a plane to fight in the conflict.

After talking him out of that, Duncan said he knew the journey he had to take.

After flying into Poland, Duncan made his way to the border of Ukraine and Poland, near the Polish city of Medyka. He worked a few connections to find a translator with a car, who helped him navigate during his time there from March 28 until mid-April.

What he found at the border was a mass of Ukrainians who had fled to Poland. Most of the people he talked with were women, children and the elderly, as men were required to stay and fight.

With the help of his translator, Duncan conduced more than 20 interviews with people who had fled Ukraine as well as humanitarian workers serving refugees.

Duncan even took one day to cross into Ukraine, calling it “the most impactful experience I had over there.”

He crossed the border on foot, and when we returned the same day, he had to wait in line more than nine hours to enter back into Poland because of all the people waiting. As he waited, he saw a pile of hundreds of kitchen knives at the Polish border, representing that families had made it to safety and could discard their only form of protection.

Despite all of the devastation and sadness he observed, the takeaway from all of his conversations with Ukrainians struck a much different tone.

“The one thing that stood out was how positive and hopeful all of the people were,” Duncan said.

RELATED: In Leaving Ukraine, Refugees Find a Home and Sense of God’s Family

“These people I talked to have been through literal hell, seen family members be killed and have been traumatized, yet all of Christians I talked to said it was their prayer that God would use this event to bring revival to our country.”

Duncan also spoke highly of all the ministry and humanitarian organizations he saw working on the border “being the hands and feet of Jesus.”

Proceeds for the book, containing highlights from Duncan’s conversations, will go toward humanitarian aid for Ukraine.

As Christians continue to pray for and minister to Ukrainians in the midst of the ongoing conflict, Duncan encouraged people to learn from their faith.

“Jesus is present even in the darkest and most evil situations,” Duncan said. “It personally hit me that God never abandons us. I just learned from the amazing faith of these people who have had everything they have materially taken away.”

“Hope For Ukraine,” is available starting Sept. 6 wherever books are sold.