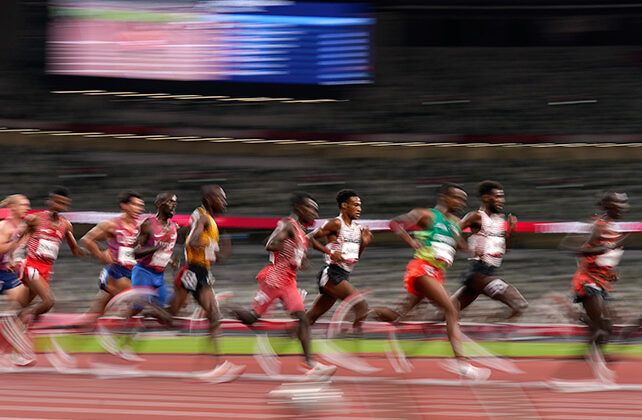 No, he’s not running any races or seeking to earn more medals than Olympic record holder Michael Phelps.

Weir, secretary of the Major Sports Events Chaplaincy Committee and executive director of Verite Sport, is attending the Olympics as media and acting as an unofficial chaplain to athletes.

With Verite Sport, his Christian nonprofit based in the United Kingdom, he usually attends 15 to 20 elite track meets a year to support the athletes spiritually and write about the intersection of sports and faith (“Sport is part of God’s creation,” he said).

Weir has attended every track and field session so far at the Tokyo Olympics, he said. He knows about 100 Olympians competing in the Games and said many see him as a “Christian friend” and familiar face at an unusual Olympics, held without spectators and the usual support systems amid the continuing COVID-19 pandemic.

“I constantly sensed that athletes were pleased to see me as a familiar face when friends could not be there,” he said.

With even accredited chaplains limited to interacting with Olympians virtually, he has been trying to see athletes at the stadium after they compete and sending them daily devotions via email. He knows another chaplain in the U.K. who has been watching competitions in the wee hours of the morning to exchange WhatsApp messages with athletes she knows in Tokyo, “rejoicing with those who rejoice and mourning with those who mourn.”

Across the time difference between the United States and Japan, Weir answered questions from Religion News Service by email about how faith is helping athletes through the unprecedented challenges of a pandemic Games. This interview has been edited for length and clarity.

How does your experience at the Olympics this year compare to previous years?

Everything is so different this year in terms of restrictions. On arrival I had to quarantine for three days. Since then, I am still not allowed to travel on public buses or trains, not allowed to eat in public restaurants or go to bars; no shopping or sight-seeing. Before coming I had to complete an activity plan, listing all the places I wanted to go. The plan had to be approved by the Japanese government. My plan just listed four places: Olympic Stadium, my hotel, Olympic Village and the main press center.

Athletes normally spend two weeks in the village: opening ceremony, compete, party, shop, sightsee and closing ceremony. This year athletes come at most four days before and leave two days after. They are prisoners in the village — not allowed to leave, no sightseeing, no shopping. No family or friends to celebrate or commiserate with.

How are you able to meet and offer support to athletes at these Games?

In London 2012, there were 20 international Protestant chaplains accredited at the Games, plus over 100 other U.K.-based chaplains of the four religions recognized in the Olympics (Judaism, Islam, Christianity and Buddhism). There were about 15 chaplains in total in Rio 2016. In both 2020 and 2016, chaplains organized regular meetings. For Christians, there was Mass several times a week, Sunday Protestant services and midweek morning and evening prayers each day.

In Tokyo, only Japanese chaplains were accredited, and in the end they are not allowed into the village where athletes live. For 2020 (I know it is 2021, but the Games are still called Tokyo 2020) there are no spectators, and currently, as I understand it, the only foreign people allowed into Japan are those accredited for the Games and essential others. Without media accreditation, I would not have been allowed into Japan.

I meet athletes (99% of my contacts are track and field) after they compete. I can also go to the Olympic Village and meet an athlete by arrangement. That is OK, but we have to stand on either side of a fence, two to three meters apart, so it’s not conducive to intimate conversation.

I am only able to have brief conversations at the stadium, but several athletes have told me it is great to see a friendly face. Remember there are no family or friends to share the biggest moment of their professional lives with.

How does this year’s Olympics — held during a pandemic without spectators or athletes’ families and loved ones present to support them — pose new challenges for athletes?

The Olympics is the pinnacle of many athletes’ careers. It can go well or be a disaster. The Rev. Dr. Ashley Null, an experienced Olympic chaplain, describes the Olympics as “four funerals and a wedding,” as many more athletes are disappointed with their performance than are successful.

If you win a medal you want to share that moment with your family and those who have helped you get there. If it goes badly, you need the consolation of those who love you and who are on your side. In Tokyo, athletes do not have family or friends with whom to share the triumphs and disasters.

How can faith help athletes face those challenges?

Sport promotes a performance-driven identity. You are judged on your performance. If you win a medal, you are a success. Everyone wants a part of you. If you do not make the final, you are a loser and can feel of no value. If you win, Nike may be dangling a lucrative contract in front of you. If it all goes wrong, you may need to find another job.

The Christian view is that God loves people so much that Jesus died in their place. That makes humans significant. We are loved by God for who we are — not because of what we can do. If an athlete understands that they are significant because God created them and loves them, they are free to compete and use the gifts they have been given. They do not have to be successful to prove themselves worthy of God’s love.

Athletes are told they need to be mentally strong. Talking about mental health was seen (as) a weakness. An athlete talking about mental health was told to “man-up” or was dismissed as not being mentally tough enough, not able to stand the pressure. Sports psychologists were employed to make athletes mentally tougher. Coaches would routinely bully athletes to make them tougher.

Now we are much quicker to recognize mental or spiritual needs as being as important as physical. Taking Simone Biles as an example, she became world champion at the age of 16. At 16, she may be the best gymnast in the world, but is she mentally ready to deal with that level of competition and the expectations on her and the celebrity which has surrounded her since her teens? Skateboarding is a new sport this year. The winners in one class were a 12-year-old and 13-year-old girl. How are they equipped emotionally to deal with what is happening to them?