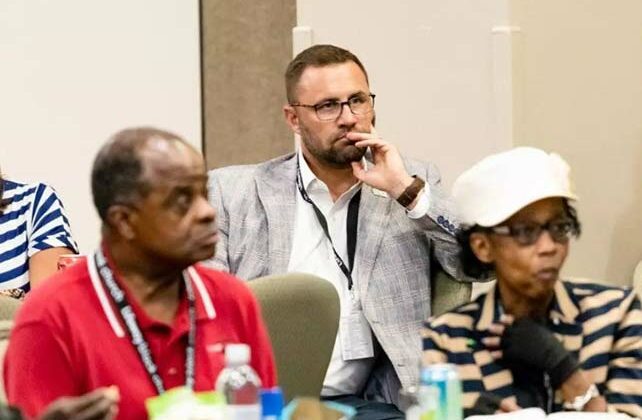 “These are my friends. I believe in what they’re doing. African American churches are important to the SBC, more so now than ever before,” Dew said in the interview during the pastors and wives reception hosted by the National African American Fellowship of the Southern Baptist Convention. “There’s more work that’s got to be done. There’s more help that’s got to be given. There’s more conversations that need to be had, and you don’t get to do any of that by sitting it out.”

Dew, who has led NOBTS since 2019, said he has been building deeper relationships with NAAF leaders during his tenure as president.

“I started I guess about a year and a half ago, having really just important and fruitful conversations with a lot of the NAAF leaders,” Dew said. “This was right after all of the George Floyd, the riots, all the national debate about CRT, and ended up in some really helpful, fruitful conversations, really from both sides, and I think in that, just a friendship was formed between several of us.

“I think that Southern Baptists are in a much healthier place than most people would think they are on racial issues” he said. “… I am confident that if we can have the conversations we need to have, I think that’s going to do a lot of good for a lot of people. … [T]here’s still more work that has to be done to be where we need to be.”

Dew, whose family is also attending the conference, is teaching one of dozens of small-group classes available to attendees. His two-part class, offered July 19 and 20, is God and the Problem of Evil. NOBTS is also hosting a luncheon for conference attendees.

Unzicker and McLaurin greeted conference attendees on the opening night of the event from the stage of Spilman Auditorium.

“Brothers and sisters, welcome to the great state of North Carolina. We are glad that you are here,” Unzicker said. He described the work of North Carolina Baptists as a movement of churches, “because God is on the move.

“Ever since Genesis 3 and all the way to Revelation, when someone from every nation, every tribe, every tongue, every people is around the throne saying, ‘Worthy is the Lamb who was slain to receive power and honor and riches and might and glory forever and ever, Amen,’” Unzicker said, “God is on the move to rescue His people.”

He described Southern Baptists as a convention of churches working together to fulfill the Great Commission, and North Carolina as not a politically based group, but a group based on “the Lamb who was slain.

McLaurin, the first African American to lead a national entity, thanked pastors for their sacrificial support of the Cooperative Program.

“I want to thank you for your partnership. All of us are partnering together in different parts of the country to do one thing, and that’s to help get people off the road to hell, and to get them on the road to heaven.”

McLaurin offered free resources including “Next Level Stewardship” and “The Winning Way,” aimed at helping mobilize churches in every area of Southern Baptist life. He invited attendees to the 2023 SBC Annual Meeting June 11-14 in New Orleans.

“It is a joy for me to get to serve you,” McLaurin said. “My joy is to wash the feet of those that serve the bride of Christ.”