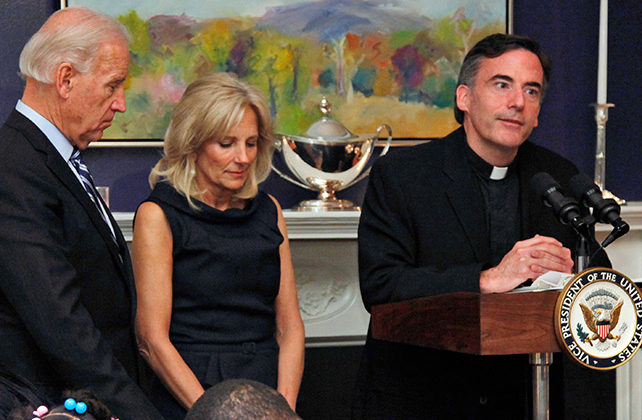 SANTA CLARA, Calif. (AP) The Jesuit priest who presided over an inaugural Mass for President Joe Biden has resigned his position as president of Santa Clara University in Northern California, college officials said, after an investigation found he engaged in inappropriate, alcohol-fueled conversations with graduate students.

The Rev. Kevin O’Brien, at the direction of Jesuit officials, has begun a therapeutic outpatient program to address personal issues, including alcohol and stress counseling. He had been president of Santa Clara University since July 2019 and was placed on leave in March.

The university announced O’Brien’s departure in a statement to the campus community on Wednesday that included messages from acting President Lisa Kloppenberg and board of trustees Chair John M. Sobrato. O’Brien had notified the board of his resignation Sunday and the trustees accepted it the next day.

The private Jesuit institution in the Silicon Valley, founded in 1851 as the first Jesuit university in the West, is ranked as one of the top 25 schools for undergraduate teaching nationwide. California Govs. Gavin Newsom and Jerry Brown are among its alumni.

In a letter to the university community dated Wednesday, O’Brien wrote that he hopes to return to active ministry as a Jesuit priest after he completes the four- to six-month outpatient program. He did not give details about his conduct, writing only that there had been “accounts of my behavior over the past year in certain social settings with adults that did not meet the highest standards of decorum expected of me as a Jesuit.”

“After much prayer and thought and out of deep love for Santa Clara, I have concluded that the best service I can offer to our beloved university is to step aside now,” he wrote.

O’Brien has known the Bidens for about 15 years; they met when he was serving at Georgetown University, another Jesuit college.

O’Brien gave the service at Cathedral of St. Matthew the Apostle, one of the most prominent Catholic churches in Washington, in January for Biden, who is the nation’s second Catholic president, as well as Vice President Kamala Harris, their families and elected officials before the inauguration ceremony at the U.S. Capitol. He also presided over services for Biden’s inaugurations as vice president.

“This is a challenging time for Santa Clara, but Fr. O’Brien has shown both generosity and freedom in wanting to do what is best for the university,” said the Rev. Scott Santarosa, head of the Jesuits West Province that conducted the investigation, in a statement. “With care for the faculty, staff, students and entire Santa Clara community, he has decided to step down.”

Sobrato’s statement said the investigation found that O’Brien “engaged in behaviors, consisting primarily of conversations, during a series of informal dinners with Jesuit graduate students that were inconsistent with established Jesuit protocols and boundaries.”

The dinners involved alcohol, Sobrato wrote, but no inappropriate behavior was discovered outside of these events.

The Survivors Network of those Abused by Priests, known as SNAP, on Wednesday called for the Jesuits to broaden the investigation to other places O’Brien previously worked, including Georgetown University, to see if other students would come forward.

“SNAP is alarmed with the limited amount of information that has been provided about the case and wants to see the probe expanded,” the statement said.