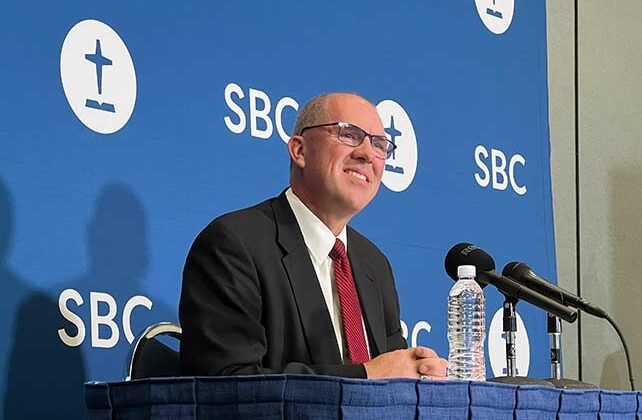 Sexual abuse reform could very well be a constant point of discussion on the floor of SBC annual meetings for years to come. As such, Barber said the makeup of the ARITF needed to reflect those differences of opinion as seen each June.

“The investigation is over. And so, this group is going to be deciding how to make implementation of best practices for the Southern Baptist Convention and [for] our member churches to have all the tools that we need to be able to work to prevent and respond well to sexual abuse,” he said. “When we make decisions and … try to implement things, that’s something that our Southern Baptist churches do together.”

The task force is expected to bring a report to messengers at next year’s annual meeting in New Orleans, but periodic updates are also expected.

Barber said a “deliberate diversity” among the task force members came about due to the current polarized environment and “probably” means there is someone on the task force “to make you uncomfortable.”

And he believes that’s okay.

In the video, Barber also addressed public complaints surrounding the appointment of Indiana pastor Todd Benkert and allegations by Texas pastor Tom Buck and his wife, Jennifer, that Benkert was involved in the mishandling of a story revealing Jennifer’s past abuse.

However, Barber went on to cite Benkert’s work related to supporting sexual abuse survivors and reform efforts. That included a booth at this year’s SBC Pastors’ Conference in Anaheim, a breakout session during the annual meeting on teaching trauma-informed ministry and consistently building relationships with abuse survivors. In addition, Benkert can provide his own perspective as someone who has survived a false accusation of abuse.

The task force “needs to have good ideas about preventing and responding to clergy sexual abuse,” said Barber. “Todd has demonstrated that he’s thinking about those ideas and he’s working to try and implement them.”

Barber had never experienced an in-person conversation with many of the task force members and needed to introduce himself on his initial phone call with several of them. Backgrounds range from serving at the national SBC level regarding sexual abuse, as is the case with Marshall Blalock and Mike Keahbone, as well as on the state level like Melissa Bowen, Brad Eubank and Jon Nelson.

Bowen, a retired lawyer, has worked with Alabama Baptists’ sexual abuse task force. Eubank is a sexual abuse survivor who leads Mississippi Baptists’ efforts. Nelson serves as president of the Missouri Baptist Convention and has also led in that state convention’s abuse reform response. Blalock and Keahbone are chair and vice chair of the ARITF.

The perspectives of large and smaller churches are considered as well, according to Barber. Jarrett Stephens has led Champion Forest Baptist in Houston to more than 12,000 attendees across three campuses, including the largest Spanish congregations in the SBC. Due to their size, such churches have had to implement policies and procedures that may be new for many smaller churches across the Convention, Barber said.

“I started absolutely determined to make sure that the perspective of our smaller churches would be represented on this task force,” said Barber. “We desperately need people who are representing that point of view because those churches face a totally different set of realities that have to do with their supply of volunteers and financial resources.”

Cyndi Lott is also a retired teacher who has experience in observing and reporting suspected accounts of abuse.

It’s not a given that the Lotts voted for him in Anaheim, according to Barber. Jesse Lott has posted concerns on Twitter over a drift toward liberalism in the SBC as well as voicing his support for former Southwestern Baptist Theological Seminary professor David Allen’s account of departing the Fort Worth school after 18 years.

“It’s my job to be president of all Southern Baptists,” said Barber. “As I told you, I deliberately tried to structure this task force in such a way that all the discussion that we would have on the floor in the annual meeting, we’d be able to have in the task force among people who are committed to the task of addressing sexual abuse.”

It will be important to consult Southern Baptist polity in implementing reforms, said Barber. Southwestern Seminary professor Gregory A. Wills’ background will prove invaluable for that purpose.

Wills is the dean of the SWBTS School of Theology, professor of Church History and Baptist Heritage, and senior fellow of the B.H. Carroll Center for Baptist Heritage and Mission.

“I know a lot of people want to make sure that local church autonomy and other Southern Baptist distinctives about our structure and organization and mission are understood and that the solutions … fit with that [and are] crafted based upon an understanding of who we are and how we organize,” Barber said.

Barber noted there may be disagreements in regard to the appointments and the group’s future work.

“I’ve just been trying to put together a task force that would bring good recommendations that would work for all of our churches, so that we could address the very best possible way to prevent sexual abuse and respond well to it,” he said.

“We need a diverse task force that will only succeed if they pull together to face the task before them. That’s what we have in this task force. There’s a lot of diversity of opinion and size of church and … they’re going to have to pull together in order to do this. “The same is true for our convention. And so, I’m hoping that they can lead us forward in that way.”