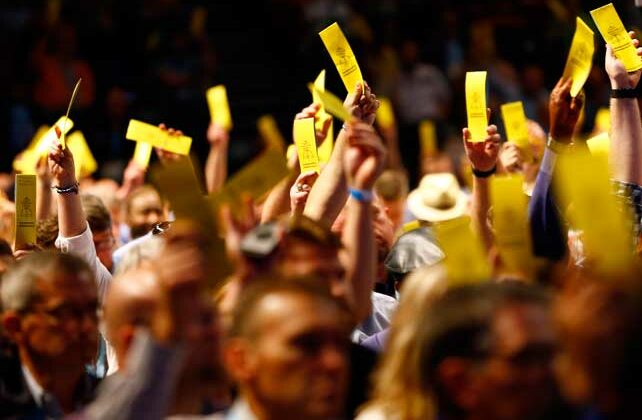 (RNS) If he had the chance to turn back time, Pastor Stephen Feinstein says, he might not have proposed Resolution 9.

The innocuous-sounding and nonbinding statement adopted by Southern Baptists who attended their 2019 annual meeting has contributed to a fierce battle over critical race theory, an academic approach to understanding systemic racism. The resolution allowed for CRT to be used as an analytical tool but also stated that it should be subordinate to Scripture.

The debate around CRT has only grown more contentious in the years following, even as the nation’s largest Protestant denomination was unable to meet in person for two years due to pandemic restrictions.

“Oh my gosh, I had no idea, and if I could do it all over again, I would have just shut my fingers up and not typed anything,” said the California pastor and U.S. Army Reserve chaplain who admits he might have naively thought it would be adopted and harmony would reign.

“That is not what happened.”

As the 2021 Southern Baptist Convention annual meeting grapples with a number of serious challenges — at least a four-way presidential election, declining membership, charges and countercharges about how it has handled sex abuse claims — some will be focused particularly on resolutions related to CRT and to Resolution 9.

The two-day gathering is set to begin on Tuesday (June 15) in Nashville, Tennessee, with attendance expected to be more than 16,000 people, the highest in 25 years.

The CRT debate reached a higher dimension when the SBC’s Council of Seminary Presidents issued a statement late last year declaring CRT and intersectionality, another academic theory that addresses exploitation when gender and race intersect, are incompatible with the latest version of the denomination’s faith statement, adopted in 2000.

But according to Southern Baptist polity, each meeting’s resolutions represent the thinking of the messengers, or delegates, attending that particular gathering. A new resolution could be adopted, but historically, old ones aren’t removed.

“That resolution that was passed will always be in the record books,” Jon Wilke, media relations director for the SBC Executive Committee, told Religion News Service in 2020.

However, at least three proposed resolutions for the 2021 meeting could be considered clarifications of Resolution 9 that Southern Baptists could potentially adopt this year.

One resolution, proposed by Feinstein despite his second thoughts, clarifies his view that critical race theory is not necessary, that any truths that come from it can also be found in Scripture, while acknowledging systemic racism exists.

A second resolution is proposed by Pastor Todd Littleton, a minister and podcaster in Oklahoma. Titled “On the Incompatibility of Structural Racism and Oppression with the Baptist Faith and Message,” Littleton’s proposed resolution counters the seminary presidents’ declaration against CRT.

Interviewed shortly after the release of a leaked 2020 letter by Russell Moore, who recently resigned as president of the Southern Baptist Ethics and Religious Liberty Commission, Littleton said it’s ironic there’s a debate about the existence of structural racism.

“Here we are, we’ve got this big brouhaha over CRT and people claiming that we’re really not racist, we’ve dealt with all that, we don’t need to talk about it,” he said. “And one year ago, the president of the ERLC pens a letter outlining the very ways that’s been real in our denomination.”

But another SBC pastor from Oklahoma — whose governor recently signed into law a legislation that bars schools from teaching concepts of critical race theory — is a supporter of a third proposed resolution titled “Southern Baptists Against Racism.” That statement affirms the seminary presidents’ determination that critical race theory and intersectionality do not align with their denominational faith statement.

Wade Burleson, a pastor of an Enid, Oklahoma, church, argued CRT is rooted in Marxism.

“Christ is a uniter,” said Burleson. “I don’t see CRT uniting. I see it dividing. Marxism has a goal of dividing.”

Pastor Dwight McKissic of Texas wrote an essay posted Wednesday on SBCVoices.com that responds to those who connect CRT to German philosopher Karl Marx.

“Derrick Bell, who is considered the father of Critical Race Theory, denied any Marxan influence or European scholarly influence on his development of CRT,” wrote McKissic, who said he would leave the predominantly white SBC if messengers “denounce CRT in its entirety” at the meeting.

“If you want to know what CRT is, it is everything Martin Luther King has written, including his ‘I have A Dream Speech.’”

Should McKissic, who already left the Southern Baptist of Texas Convention over its anti-CRT stance, depart the larger denomination, he would join several other prominent Black leaders who made that move in recent months.

This year’s resolutions committee chair, James Merritt, confirmed there are “at least 3 or 4” race-related resolutions proposed in the “thick notebook” he will be reviewing with other committee members before they determine which ones to accept, reject or refine and present for adoption at the meeting.

Merritt, who pastors Cross Pointe Church in Duluth, Georgia, said a resolution is not going to solve the SBC’s growing debate about race relations. Still, he acknowledged there’s a lot riding on the committee’s work this year, with CRT one of the “points of tension” it has to manage.

“We’re calling on the Lord of heaven to give us wisdom and discernment,” said Merritt, who was president of the SBC from 2000 to 2002. “I had an entity head tell me he thinks this may be the most pressure-packed important resolutions committee in 40 years, and he may very well be right.”

The divides about CRT are not strictly between people of different races in the Southern Baptist Convention, which was founded in 1845 with a defense of slavery.

Voddie Baucham Jr., an African American dean of a Zambia-based divinity school, is against the use of CRT and devoted pages of his new book, “Fault Lines: The Social Justice Movement and Evangelicalism’s Looming Catastrophe,” to the development and passage of Resolution 9 — for which he faults the 2019 resolutions committee for opening the door to engagement with CRT.

Resolution 9 concluded: “Critical race theory and intersectionality should only be employed as analytical tools subordinate to Scripture — not as transcendent ideological frameworks.”

“This is the crux of the matter: The million-dollar question is whether CRT is a worldview or merely an analytical tool,” writes Baucham, who who describes CRT as a worldview. “Tools don’t explain; worldviews do.”

The Rev. Marshal Ausberry Sr., president of the National African American Fellowship of the SBC, said most African American churches in the denomination do not see CRT as “the hill to die on.” He noted several Black churches have recently become affiliated with the SBC and his fellowship, even as some Black leaders have left the SBC.

Ausberry, who also is the first vice president of the SBC, noted Feinstein’s 2019 proposed resolution was refined by the resolutions committee — by men and women who were not liberals but rather mostly SBC-trained scholars.

“These are very conservative men and women and who made all kinds of qualifications in their address of CRT,” he said, “not embracing CRT but simply carving out a safe lane for someone — not in the pulpit, not in the elementary school or high school, but in the safety of a college or similar classroom — to help build cultural competencies in future pastors and church leaders that there are some things that can be systemic racism.”

Feinstein, who describes himself as an ethnically Jewish pastor of a Southern Baptist congregation, hopes that despite expectations of a contentious meeting fueled by debate on CRT and other issues, there will be a way to move forward.

“I just want our denomination to stay united in our cooperation on global missions and church planting with the guardrails that are set by the Baptist Faith and Message 2000,” he said. “I want the Lord to protect us from not being, really, just blown up.”