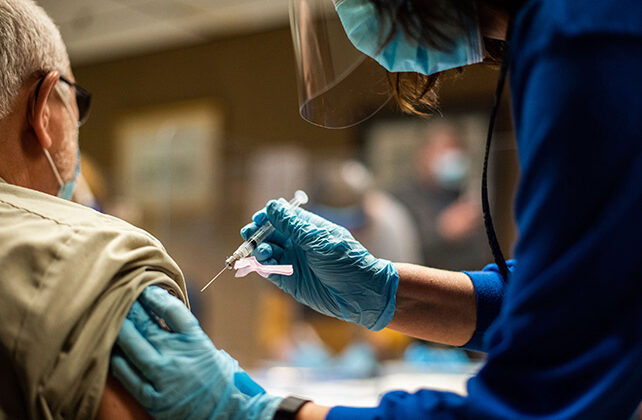 (INTERFAITH AMERICA) Many private businesses, hospital systems and universities that require COVID-19 vaccines also offer religious exemptions. But with no consistent method for navigating these requests — or defining the terms, for that matter — leaders are scrambling to respond.

Catholics who study or work at a Catholic college or university, for example, won’t get far if they cite their faith as a reason not to get vaccinated, although they may have success making similar requests at secular institutions. Requests have been coming in nonetheless, says the Rev. Dennis H. Holtschneider, president of the Association of Catholic Colleges and Universities, which serves as a resource and voice for its 200 member campuses.

“And our presidents turn to find out if there is such a thing. The answer is no. There is no religious exemption in Catholicism,” Holtschneider said, citing Vatican teaching  on the matter. He notes that they may accept other religions as a basis for exemption.

“You’re not going to find in this church a lot of sympathy for those who don’t want to support the health of the community,” Holtschneider added, noting that Catholic hospitals nationwide have been on the frontlines caring for patients with COVID-19. “This is a church that does health care.”

Dr. Jeffrey C. Barrows, senior vice president of bioethics and public policy at the Christian Medical & Dental Associations, started fielding similar calls in late July, maybe a half dozen so far, from colleagues who feared taking the vaccine conflicted with their Christian beliefs.

“Our official position is we are recommending that people get the vaccines,” said Barrows. “We do feel that the benefit of being vaccinated against COVID-19 outweighs the risks.”

His group opposes COVID-19 vaccine mandates, however, and a  statement on its website notes that “there is no justifiable moral obligation to accept vaccination.”

“Our members are divided,” Barrows said. He encourages his colleagues who oppose vaccines to wear masks and agree to frequent testing.

As the number of businesses that mandate COVID vaccines for their employees continues to rise — Tyson Foods, Microsoft and United Airlines announced mandates last week — so does the number of questions about religious exemptions.

“This is all such uncertain territory,” said Jenna Reinbold, a professor at Colgate University who studies the intersection of religion and law. “All kinds of legal professors and professionals are talking about this right now.”

So are college and university leaders, according to Holtschneider. “These are very fresh questions on our campuses right now,” he said.

Following guidance from the Equal Opportunity Employment Commission, many private businesses, hospital systems and universities that require vaccines also offer medical and religious exemptions. But there’s no consistent method for navigating these — or defining the terms, for that matter.

At Rush University Medical Center, a teaching hospital in Chicago with 14,000 employees, a new committee met for the first time last week to begin reviewing religious exemption requests. Its members include infectious disease experts, human resources and labor relations representatives, hospital administrators and attorneys, as well as the hospital’s lead chaplain, a tenured professor who chairs the university’s department of religion, health and human values.

“It’s a really wonderful, well-rounded group,” said Lisa Weichman Harries, a hospital administrator who serves on the committee. Hospital officials wouldn’t disclose how many employees have asked for religious waivers, but Weichman Harries said all must follow a similar process.

A standard form asks if their opposition is “related to a religious institution, and if it does, we ask for a letter from that institution,” Weichman Harries said. For those who don’t belong to a house of worship or aren’t able to secure such a letter, “the next piece there is to describe your religious or moral belief, observance or practice, how long you’ve had that, and ask them for their reason.”

The Civil Rights Act of 1964 includes language forbidding religious discrimination, a protection the U.S. Supreme Court upheld in a 2014  case  involving a Muslim woman’s right to wear a hijab to work at an Abercrombie & Fitch clothing store. But during a surging global pandemic, employers reviewing the religious exemption requests must weigh such religious protections against community health and safety, navigating deeply personal religious beliefs and questions about religious authority, all in a moment of divisive political tensions and widespread misinformation about the vaccine.

“This is tough,” Colgate University’s Reinbold said. “One of the touchy areas about getting into an inquiry about the truth of somebody’s religious objection to a vaccine is, an individual within a religious tradition may have a different understanding than other individuals in that religious institution.”

Early in the pandemic, for example, Pope Francis gave Catholics permission to celebrate Mass online to prevent the spread of COVID-19. That didn’t stop some Catholics in the United States from petitioning courts to lift these mandates, saying they violated their religious freedoms.

“You have a dispute here between certain individuals and basically the boss of Catholicism, the Pope,” Reinbold said.

“If you’re a religious person, and you say, ‘I need an exemption because my faith tells me I do,’ it’s very hard for the government to say that’s insincere or that’s inconsistent with their faith,” Inazu said. “The way the law works, even idiosyncratic religious beliefs that are out of step with the religious hierarchy are still considered sincerely held.”

Many prominent religious leaders and organizations encourage their community members to get the COVID-19 vaccine: the  Vatican, the  National Association of Evangelicals, the  National Council of Churches, the Jewish Orthodox Union and  Rabbinical Council of America  and the  National Muslim Task Force on COVID-19  are among those who have released statements favoring vaccination. A recent  study  shows vaccine hesitancy is declining among faith groups, thanks in part to targeted advocacy within faith communities.

Still, examples of religious exemption claims range from some anti-abortion Catholics and Protestants who object to researchers’ use of fetal cell lines to develop and test the vaccines to members of traditions that rely on faith healing, including some Christian Scientists, to some Muslims unsettled by public disputes over COVID-19 vaccines.

“The prophetic tradition has counseled Muslims to avoid doubtful and suspicious matters, and in light of that, there’s certain legal maxims around certainty,” says religious liberty attorney Asma T. Uddin, a fellow at the Berkley Center at Georgetown University in Washington, D.C. “Certainty is removed only by equal certainty; you can have an exception to that if you think your life is in imminent danger.”

Uddin and others caution that misinformation campaigns around the vaccines have fueled a sense of uncertainty among some religious believers. Officials in the state of Oregon have found a way to combat misinformation, at least in cases involving childhood vaccines. Before approving “non-medical” exemptions to vaccines required for children, Oregon  requires parents  to watch a video explaining vaccines’ safety and health benefits. Oregon also provides a list of resources from the CDC and pediatric health experts.

Could employers facing high numbers of religious exemption requests ask employees to read about what experts in their faith tradition have to say about COVID-19 vaccines — a pandemic-inspired religious literacy curriculum, so to speak?

“I don’t think there’s a constitutional problem with that,” Reinbold said.

The bigger problem with people asking for religious exemptions, experts say, isn’t about doctrine at all; it’s about  sincerity. Some anti-vaccination activists have mounted online campaigns encouraging people to claim religious exemptions, leading some to question whether politically motivated anti-vaxxers are trying to game the system.

Others, noting Supreme Court cases protecting the rights of conscientious objectors to the Vietnam War, say it may be enough to claim a moral or philosophical opposition to the vaccine.

“Those cases set a precedent that is also looming in the background,” Reinbold says.

Meanwhile, as religious exemption requests begin to make their way through hospitals, universities and corporations, COVID-19 infection rates are surging in many parts of the nation.

“What worries me about the current moment is, because of how politicized the vaccine has become, I think there’s a possibility of a lot more people refusing to be vaccinated and then hindering the country’s ability to get the pandemic under control,” Inazu said.

Inazu finds efforts to demonize the unvaccinated unhelpful at best. It’s important for institutions with vaccine mandates to note that “there are really big questions about communication and messaging and empathy,” Inazu added. He notes that some who oppose vaccines may be “very seriously struggling with whether they should be vaccinated. How do you engage with your neighbor who is kind of thinking about this differently?”

The Rev. Emilie Townes, a social ethicist and dean of the divinity school at Vanderbilt University in Nashville, got vaccinated against COVID-19 earlier this year. Considering what she’d say to a colleague who believes their religion prohibited the vaccines, she said she’d encourage them to study “fact-based, medically sound information, and put that in conversation with your religious beliefs, and really do the hard work of reflection and discernment of what you feel you can and must do.”

So far, it’s not a conversation she’s had to have. All of the faculty and staff at her divinity school got the vaccine.

(This article first appeared on Interfaith America, a website of the Interfaith Youth Core.)