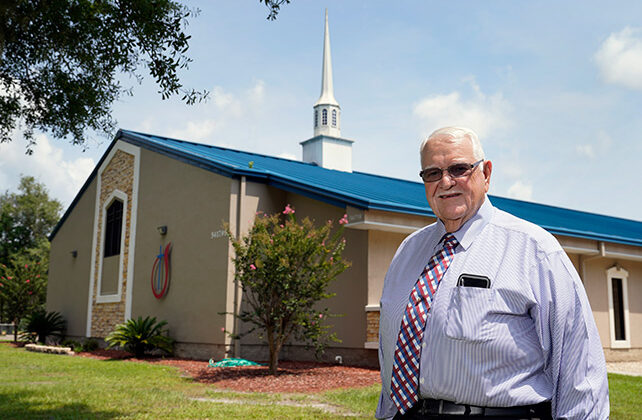 CALLAHAN, Fla. (AP) In a rural stretch of northeastern Florida where barely half the people have gotten a coronavirus shot, Roger West had no problem telling others he was “adamantly anti-vaccination.”

The co-owner of the Westside Journal weekly newspaper used his voice as a columnist to widely share his doubts about the vaccine and his mistrust of the health experts in the U.S. who have been urging everyone to get it.

But something happened to change his mind: Two of West’s close friends became ill with the virus, and a third died. Rattled and stressed, he prayed for guidance. Then, when his mother and another relative both urged him to get vaccinated, he took it as a sign from God. West drove to the Winn Dixie supermarket and rolled up his sleeve for the first of two injections of the Moderna vaccine.

“All of a sudden, it hit real close to home,” he said.

West is not alone. In this inland area of Nassau County, sandwiched between Jacksonville and the Okefenokee Swamp at the Georgia-Florida line, a devastating resurgence of the coronavirus is making even some die-hard vaccine skeptics reconsider the shots.

For the week ending July 29, the county of 89,000 logged 810 new cases of the coronavirus. At that time it was the highest rate in Florida, one of the epicenters of a nationwide spike in infections driven by the highly contagious delta variant.

Some county residents who thought the pandemic had all but ended have seen multiple family members suddenly infected during the latest wave. One young woman in Callahan, a town of about 1,000 people, saw her fiancé, her mother and her grandmother all die from COVID-19 within a week.

“I’ve seen fear grip people like never before,” said Dwight Allen, pastor of a 200-member congregation at The Anchor Church of God. When members ask him questions about the shot, Allen tells them he got jabbed with no ill side effects.

Dr. Phillips Cao, a family practitioner who treats patients at a University of Florida Health clinic in Callahan, said many older people in the area got coronavirus shots months ago, while younger adults put them off as infections declined sharply in the spring.

“Everybody thought it was kind of dying out or going away. … Then you had this new variant come in,” he said. “It was just ripe for another bad surge.”

Before the Fourth of July, Cao said, he was seeing maybe one coronavirus patient every two weeks. Now, he said, he often tests seven patients each day. Five of them typically come back positive for the virus, and often two are so sick he sends them to a hospital.

The spike in infections could be pushing more people to get shots. State health data shows that nearly 4,400 people got vaccinated in Nassau County in the three-week period ending Aug. 12 — enough to increase the county’s total vaccinations by nearly 11%.

Prior to this latest wave of the virus, Callahan Funeral Home had not handled arrangements for any COVID-19 victims since April. That has since changed. Owner Ellis McAninch said he’s overseen funerals for five people who died from the virus since July — more than half his total business in the past month.

Despite his age, his proximity to virus deaths, a chronic lung illness, and his own recent bout with COVID-19, the 61-year-old McAninch had still not been vaccinated when he spoke to a reporter recently. He said at first he was wary of how quickly the shots were developed. But then he decided he had spent too long waiting to make up his mind.

“I should have already had this done,” he said. “Now it’s just time to bite the bullet.”

While the development of the vaccines was unusually fast, it was the culmination of many years of research. The vaccines went through clinical trials involving thousands of people and have since been given to tens of millions of people over the past eight months with no serious safety concerns.

Still, there are some who won’t be swayed.

In Hilliard, a town of 3,100 in Nassau County, 80-year-old Frances Sims refuses to get vaccinated. Long before COVID-19, Sims said, she feared vaccines required for school children might have harmful side effects and pushed for some of her grandchildren to get exempted based on religious beliefs.

After some members of her large family fell ill with the coronavirus, two of Sims’ children persuaded her husband to get vaccinated. But she won’t budge.

Her son Kenny Sims, a Hilliard town councilman, ended up getting jabbed in the spring after his employer announced plans to scale back paid leave for workers exposed to the virus.

He’s glad he did. When the summer surge hit, Sims and his wife had to care for their grown son and daughter and a 1-year-old grandson who caught the virus. He believes the vaccine protected him and his wife from getting sick, though he’s still not convinced the shots are completely safe.

“I ain’t sold that this vaccine is the answer,” Kenny Sims said. “But I believe it’s the lesser of two evils.”