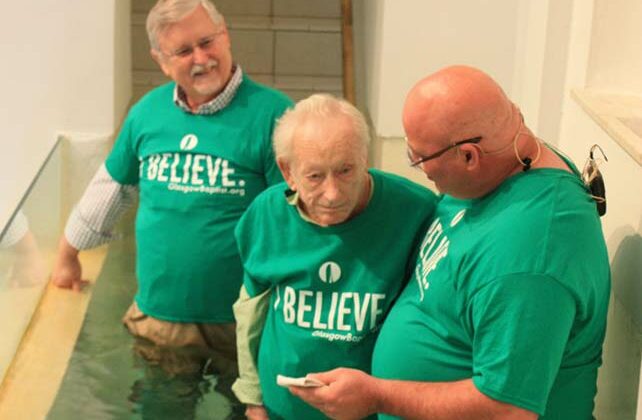 NASHVILLE (BP) – As Baptism Sunday [April 24, is Baptist Sunday in the Southern Baptist Convention] approaches, stories of older Christians being baptized are serving as a reminder that it is never too late to take a step of obedience.

One of those is Bernice Oliver at Glasgow Baptist Church in Glasgow, Ky.

Erdie Carter, senior pastor at Glasgow, said Bernice’s wife Evelyn had been a faithful member and attender at the church all the way up until the COVID-19 pandemic. During the pandemic, the couple began watching the church’s services on a local TV broadcast.

Carter said the couple have been married for 67 years, and Evelyn has faithfully prayed for Bernice to receive Christ as his personal savior.

Carter visited Bernice, 93, many times in their home and shared the Gospel with him, but had never seen a responsiveness from him. That all changed a few weeks ago.

Carter said Evelyn told him that her husband had begun faithfully watching the church’s Sunday services with her.

After a few weeks, members of the church visited their home to bring food as part of the church’s community outreach program. While at the home, Bernice said he was ready to make a decision for Christ.

After walking him through this decision, the church members followed up by asking if he would like to be baptized. He said he would.

Carter said Glasgow also observed the Lord’s Supper the day that Bernice was baptized, adding that seeing the transformation in Bernice deeply affected him and his congregation.

“Pastors often talk about that it’s never too late … but to actually see this man at 93 come to this spiritual realization and then want to publicly profess his faith in Christ, it was joy,” Carter said. “It overwhelmed me with emotions. It renewed the strength of my church members’ prayers for their own lost loved ones.”

Ena Campbell-Reid began attending Grace Fellowship: A Church for All Nations in West Palm, Fla., when a friend in her neighborhood invited her.

Campbell-Reid, 92, grew up going to a Methodist church in Jamaica and had never been baptized by immersion.

RELATED: 86-Year-Old’s Baptism Inspires Others to Be Baptized

After being immersed at Grace Fellowship Campbell-Reid told Baptist Press she was glad she made the decision to do it.

“I would encourage anyone else in the church to get baptized because everyone at the church is very nice and they will treat you very well,” Ena said.

She said another factor in her decision to get baptized was the encouragement from pastors at the church such as lead pastor Jeff Robinson.

Robinson, who also serves on the Southern Baptist Convention Executive Committee, said Campbell-Reid provides a great example for his church to reflect on the importance of following through in baptism.

“We routinely remind our church family that in spite of the suffering and brokenness we see around us, in the news, and on social media, to never forget that God is still very much at work in the world,” Robinson said.

“Ms. Ena’s following Jesus in public believer’s baptism by immersion is both an encouragement and a powerful motivation for our entire faith family.”

Carter said seeing Bernice and others be baptized goes right along with celebrating with the SBC is supposed to be about.

“The mission of the SBC is to go and preach the Gospel so that people may know and believe in Christ,” Carter said. “His desire to be saved and baptized just reminded me what Christ will do. When Christ changes our heart, it changes our perspective.”