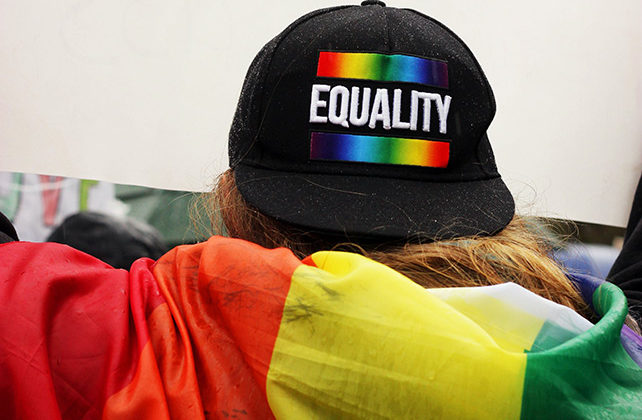 (RNS) More than a fifth of Generation Z Mormons do not self-identify as heterosexual, according to a major national study. One in 10 are bisexual.

The Nationscape dataset, which canvassed more than 318,000 Americans on a rolling basis in 2019 and 2020, had 3,881 self-identified members of The Church of Jesus Christ of Latter-day Saints in the survey. This makes it one of the largest studies of Mormons ever fielded in the United States.

One of the most valuable aspects of the data is what it can tell us about the basic demographics of the Mormon population, including gender, race, geography and sexual orientation.

Not surprisingly, there is more sexual diversity among younger Latter-day Saints than older ones. As shown below, while 94% of boomers said they were heterosexual, just 77% of Generation Z did. (This analysis borrows Pew’s cutoff dates for the generations, which uses 1997 as the first birth year of Gen Z. Only adult Gen Zers over the age of 18 were eligible for the study.)

So, 23% of Gen Zers who identify as LDS say they are lesbian, gay, bisexual or other. And nearly as many (19%) of millennials did as well. It’s notable this finding is nearly double the 10% that Benjamin Knoll and I found among millennials in the 2016 Next Mormons Survey (which broke down into 7% bisexual, 2% gay or lesbian and 1% “other”).

Let’s unpack the Nationscape study’s finding of 23% a bit more. Within Gen Z, the major outliers compared with other generations of Mormons were the categories of bisexual and “other.”

We think three points are worth making here.

So Gen Z Mormons, like their counterparts around the nation, are more likely to identify as queer. According to Pew’s recent study of Gen Z, they seem more comfortable with gender fluidity and same-sex marriage than any other generation, though millennials come close.

Gen Zers are also more likely to feel fine reporting their sexual orientation on a survey. Fewer than 1% chose the “prefer not to say” option in the Nationscape study, compared with 2% to 4% of the members of older generations who did not want to answer the question. The atmosphere today for acknowledging a nonheterosexual identity is far more hospitable than it was even a decade ago, and many Gen Zers don’t personally remember a time when they could be fired from a job for being LGBTQ+.

The second point is that Gen Z Mormons currently show more sexual diversity than older generations of Latter-day Saints because, frankly, some of them are statistically likely to leave the church but have not yet done so.

The Gen Z respondents in the Nationscape study were 18 to 22 at the time of the survey. According to our own research in “The Next Mormons,” the median age for leaving the church is around 19. In other words, there is still some settling and sorting yet to happen here. We are by no means saying all of these queer-identifying young adult Mormons are going to exit the church, of course — only that statistically, more will likely do so than their heterosexual peers.

It’s not surprising that it’s harder for queer folk to stay. The church has made a point for years of fighting same-sex marriage, condemning nontraditional families as “ counterfeit ” and preventing church members who are in a same-sex relationship from attending the temple, holding certain callings or exercising the priesthood. While there have been important steps toward compassion and understanding in the last few years, that damage still runs deep.

So the percentage of queer Gen Z Mormons will probably not be as high as 23% in future studies. That won’t be because these people will have magically become heterosexual as they get older. It will be because they will have ceased to be Mormon and will drop out of the pool of respondents who currently identify as members of the church. As well, some heterosexuals will likely continue to switch in to the religion through conversion, possibly enough to change the ratio going forward.

Finally, one surprising aspect of the study is related to race and geography. Nationscape’s data suggests that among Mormons, some racial and ethnic minorities were more likely to also be sexual minorities.

Among all Americans, heterosexuality was 87% for Hispanics and 90% for Blacks, but among Mormons it was 71% for Hispanics and 74% for Blacks. It’s a statistically significant difference because the sample size is big enough that this isn’t just a random sampling error. Still, it’s not clear why Black and Hispanic Mormons are less likely to be heterosexual than their non-LDS counterparts.

Incidentally, the Nationscape study showed a double-digit difference between Mormons who lived in Utah (94% heterosexual) and those who did not (83% heterosexual). This echoes and widens a smaller, 4-point difference we found in the 2016 NMS regarding the sexual orientation of Mormons in Utah versus Mormons elsewhere.

We speculate this is the result of self-selection, in that red-state Utah may just be a more challenging place for sexual minorities to live, at least outside of Salt Lake City.